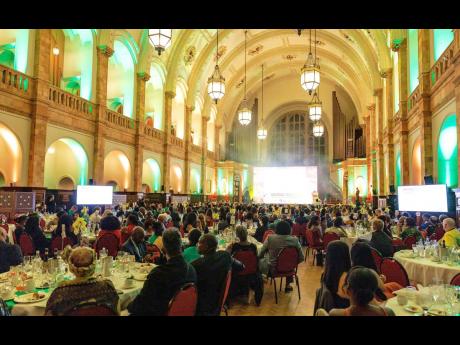 Contribution
The Great Hall at the Unversity of Birmingham was decked out in green, gold and black for the Team Jamaica dinner. 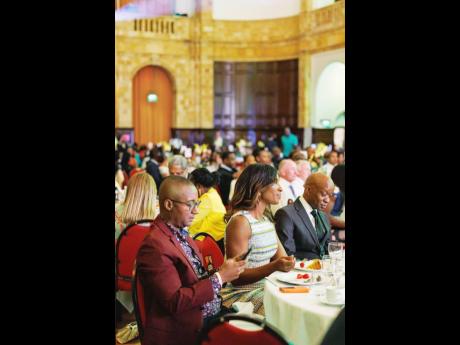 The event was hosted by the Jamaica National Group in collaboration with the University of Birmingham and the Jamaica Commonwealth Association.

A signed shirt from 100m and 200m world-record holder Usain Bolt was the star attraction at the auction along with team shirts signed by Shelly Ann Fraser-Pryce – who won her fifth 100m title at the World Athletics Championships in America last week – and sprinting sensations Elaine Thompson-Herah and Shericka Jackson.

Other items included a bronze hand sculpture from renowned artist Basil Watson and a holiday to Jamaica courtesy of the Jamaica Tourist Board and H10 Hotels.

British Olympic and World Championship medallist and broadcaster Colin Jackson was the master of ceremonies at the dinner, which included a menu specially created by Shaun Craig, associate director of culinary and development at the University of Birmingham, with help from celebrity chef, musician, and businessman Levi Roots.

Craig said it was a privilege to work with Levi on creating a bespoke menu for the dinner, which included Pulled Jackfruit Potato Cake, Caribbean Griddled Eggplant, and Jamaican Rum Cake.

He said: “I have a lot of Jamaican friends within the industry, so I chatted to them for ideas, and I also spoke with Levi Roots and put his influence into the menu.

“It was all Jamaican-based food with a bit of a twist. Levi helped me come up with Regganaise, which is half mayonnaise and half Reggae Reggae sauce, but that’s Levi’s idea not mine, so I can’t take the credit for that!

“The organisers wanted a bit of input from Levi, and I had a few calls with him, and we adjusted the menu to what he thought would be suitable for the Jamaican sports teams. He is a character and great to work with,” he added.

“The Team Jamaica athletes are being hosted at the university, and we have tried to be as authentic as we can.”

Paulette Simpson CBE, deputy managing director for JN Bank UK, said: “The Jamaica National Group has enjoyed a long-standing relationship with the University of Birmingham over the years, and this event promises to make the partnership even stronger by way of collaborating on student scholarships and bursaries. As an organisation with strong ties in the diaspora, we remain committed to supporting Jamaicans at home and abroad.“