GoodHeart | Music and art link up in ‘Save Ormsby Hall’ project 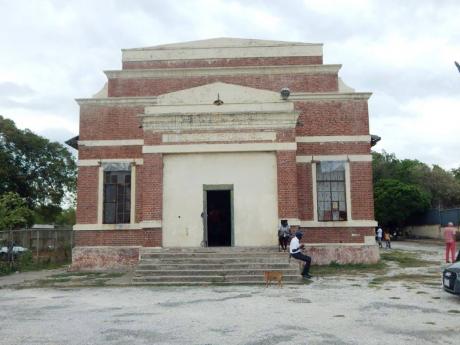 Michael Reckord
The movement to save Ormsby Hall, and make it a community centre, still has a far way to go. 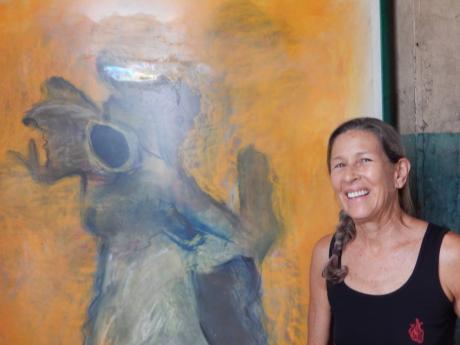 Michael Reckord
Laura Facey beside one of her large prints at Ormsby Hall. 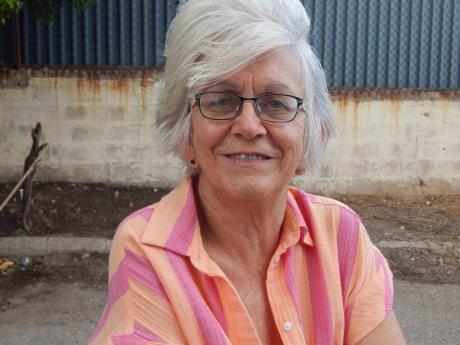 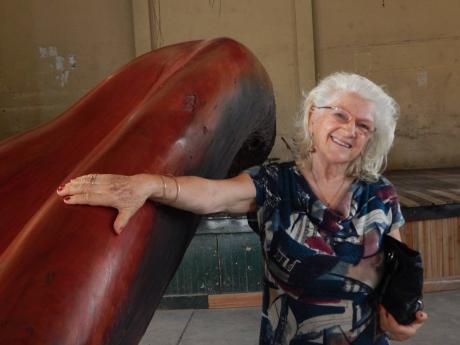 Michael Reckord
Rosina Moder stands next to one of the art pieces at Ormsby Hall. 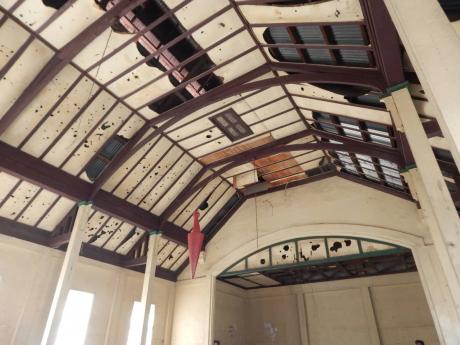 Michael Reckord
Holes in the ceiling of a deteriorating Ormsby Hall. 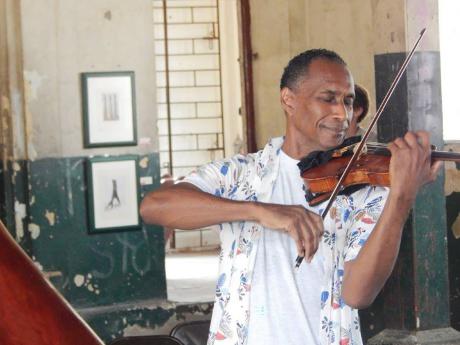 Michael Reckord
Violinist Steven Woodham in practice. The music component of the art show introduced on May 1 continued on July 24 when Woodham performed for various sets of art and music lovers throughout the afternoon.
1
2
3
4
5
6

The first phase of a Save Ormsby Hall initiative which began some four months ago is winding down. It is “an immense project” says the conceptualiser, the well-known artist Laura Facey, who is spearheading it, and the movement to save the venerable building at 3 Victoria Avenue as a community centre still has a far way to go.

Back in April, Facey removed five truckloads of old, broken down, long-abandoned furniture, appliances and equipment from the hall and then installed some 40 to 50 pieces of her art work, valued at millions of dollars. This took a month and the exhibition officially opened with the introduction of a second artistic genre, music.

It took the form of a recital on May 1 by husband-and-wife team Peter Ashbourne (violin) and Rosina Christina Moder (recorder). Ashbourne had played on the Ormsby Hall stage as a boy, when taking early music exams.

The show closed on July 31 and, over the next week or so, the artwork will be moved. Some have already been entered in the National Gallery of Jamaica’s current biennale, Facey said in an interview.

“Ormsby Hall has a new owner (the Blue Power Group of Companies), and we hope they’ll use it primarily as a community space,” she continued. Acknowledging the challenge that would pose to the owners, who need to make money, she said, “It’s an immense project, but, if the many interested parties come together and help, maybe we can provide support. In the meantime, we’re still talking.”

The chairperson of the project, Dr Elizabeth Ward, professor of urology and consultant urologist at The University of the West Indies, Mona, and chair of the board of the internationally linked Violence Prevention Alliance (VPA), got specific with The Gleaner. “We need an endowment fund to help in violence prevention,” she declared.

She explained that the fund would be used to, among other things, run music and art classes for children. The context was that Ormsby Hall is “a neutral space” between various violence-prone communities. “There are very few spaces like this, with both land and the building,” Dr Ward said. She revealed that, during the initial years of the COVID-19 pandemic, she had organised classes in drumming for children, which resulted in improvement in the youngsters’ (aggressive) behaviour.

The VPA was officially formed in January 2004 at the World Health Organization-hosted Milestones of a Global Campaign for Violence Prevention meeting. VPA is an opportunity for groups from all sectors (governmental, non-governmental and private) and levels (community, national, regional and international) to unite around a shared vision and approach to violence prevention that works both to address the root causes of violence and to improve services for victims.

Ormsby Hall was built in 1930 and named after Rev Stephen Ormsby, rector of St Michael and All Angels Anglican Church next door. It was built to accommodate public events and musical recitals but at different times housed a primary school and several families.