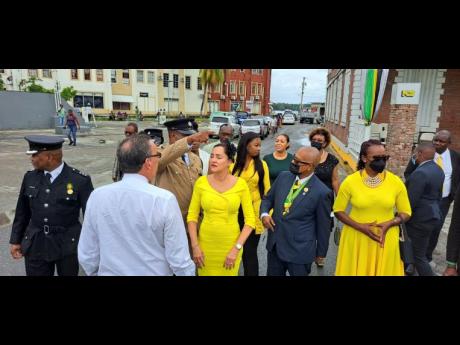 The quick decision by the Jamaica Cultural Development Commission ensured that the formal aspects of the ceremony could take place.- Gareth Davis photo

Forty-five minutes of torrential rainfall forced a change of venue for the official flag-raising ceremony to commemorate Jamaica's 60th year of Independence in Portland from outdoors to the Portland Municipal Corporation's conference room.

The quick decision by the Jamaica Cultural Development Commission ensured that the formal aspects of the ceremony could take place.

Meanwhile, councillor caretaker for the Fellowship division, Colin Bell, delivered the Independence Day message from the Leader of the Opposition, Mark Golding.

Following the ceremony, members of the Jamaica Constabulary Force, the Jamaica Fire Brigade, cadets, and students, backed by a marching band, paraded through the streets of Port Antonio.