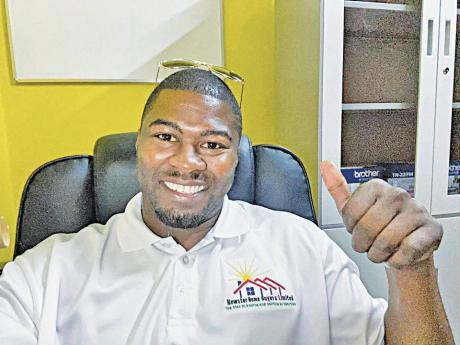 Demar Sparks, the proprietor of a start-up firm that collected millions of dollars in deposits for a failed housing development, has been jailed on fraud-related charges amid fresh complaints about a second residential project.

Sparks, the chief executive officer of Newstar Homebuyers Limited, was charged last Thursday with obtaining property by false pretence and obtaining credit by fraud based on complaints of two depositors, the police confirmed on Friday.

According to law enforcement sources, additional charges are likely as police investigators in St Ann, armed with complaints from other depositors, have already requested an interview with Sparks.

The Newstar boss surrendered to the Trelawny police last Wednesday and will remain jailed until his first court appearance, which is scheduled for this week.

Gordon Evans, the attorney representing Sparks, declined to comment on the allegations when contacted yesterday.

At least a dozen people who thought they were purchasing residential lots in the widely advertised Coral Spring housing development in Trelawny have claimed that they are owed a total of nearly $5 million in deposits made to Newstar.

The legal dilemma for Sparks and his two-year-old firm was confined solely to the Coral Spring Mountain project until Friday when one woman came forward with claims that she paid Newstar a total of $738,000 between October last year and March this year as part payment for a residential lot in Downs, Manchester.

Sparks admitted during a Sunday Gleaner interview last month that his company collected down payments from about 20 to 25 people for residential lots in the Coral Spring Mountain project late last year.

He did not disclose the total deposits collected and acknowledged that “the transaction did not come out successful”, but said some depositors have been refunded and insisted that there was no impropriety.

The authorities confirmed with The Sunday Gleaner that Sparks was not licensed as required under the Real Estate (Dealers and Developers) Act to operate as a real estate dealer, developer or salesman.

There were also questions about whether he owned property his company was offering for sale to the public.

Antoinette Rivera*, who has been waiting months to be refunded the $1.8 million she deposited on three lots, is one of the aggrieved customers who lodged a complaint that resulted in the charges laid against Sparks.

“Mr Sparks put me in a lot of debt … so I had no other choice but to seek legal action against him,” Rivera said during an interview on Friday.

Rivera reported that since Sparks’ arrest, “a couple people” have contacted her by telephone, urging her to withdraw the complaint against the Newstar CEO to allow him to reimburse her and other depositors.

But she is adamant that she will not back down unless she is refunded with interest.

“This thing has been going on for a period of time and nobody was interested in that, but now that he is locked up, people are calling me,” she said.

Investigators say there were several red flags which suggested that the proposed Coral Spring Mountain development was in trouble from the outset, even as Newstar was collecting thousands of dollars in deposits.

Sparks admitted to The Sunday Gleaner that his company is facing a lawsuit from another firm that has claimed an “equitable interest or right” to the Coral Spring property.

But he insisted that his company “acquired” the property from the Government “through one of the various methods allowed in law” and had “open and undisturbed possession” of the lands.

A plot of land in the proposed Coral Spring development was being sold for between $1.2 million and $3.2 million, with an option to make a one-time down payment of $355,000, followed by monthly payments of $29,000 until completion, according to documents reviewed by The Sunday Gleaner.

Sparks said the decision to commence advertising was based on the result of research conducted by a team of surveyors hired by his company, which showed that the Coral Spring property was “unregistered”.

He said this was the reason the sale agreements signed by depositors and perused by The Sunday Gleaner had no folio and volume numbers, a unique set of digits used to identify a registered property and its legitimate owner.

Last December, state and local authorities stepped in and shut down exploratory construction work on the project because Newstar did not have a mandatory environmental permit, which is a breach of the Natural Resources Conservation Authority Act.