Hundreds of thousands gather for mass prayer in Baghdad 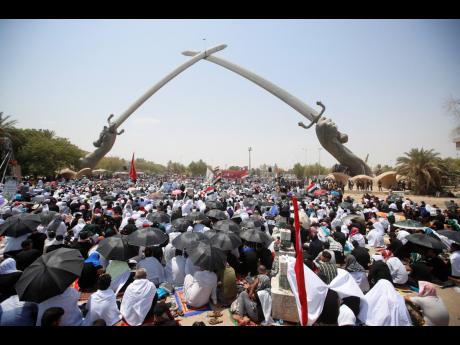 Anmar Khalil
Followers of Shiite cleric Muqtada al-Sadr gather during an open-air Friday prayers at Grand Festivities Square within the Green Zone, in Baghdad on Friday.

Hundreds of thousands of Iraqis heeded the call of an influential Shiite cleric to gather in a show of strength for a mass prayer in the heart of Baghdad’s government zone on Friday. The gathering took place amid an escalating political crisis that has put the country’s capital on edge.

The powerful cleric, Muqtada al-Sadr, had called on his followers from across Iraq to come to pray inside Baghdad’s Green Zone – a heavily fortified area in the heart of the city that houses government buildings and foreign embassies. They arrived and stood outside in the scorching summer heat, with temperatures reaching 48 degrees Celsius (118 degrees Fahrenheit).

Meanwhile, in the southern, holy city of Najaf, the head of Iraq’s UN mission, Jeannine Hennis-Plasschaert, met with al-Sadr Friday. She told reporters afterward that they discussed the importance of finding a solution to the political crisis.

Two Shiite officials with knowledge of the meeting said al-Sadr refuses to allow the formation of a new government with his rivals, in the current climate. The officials did not elaborate and spoke on condition of anonymity, in line with regulations.

Friday’s mass prayer was the latest display of strength by the cleric, whose political power derives from his strong grassroots support base. The crowds stretched for miles, spilling into the streets outside the square.

Several people fainted after waiting for hours for the prayer to start and were taken to hospital in ambulances.

Al-Sadr has used his large grassroots following as a pressure tactic against his rivals after his party was unable to form a government despite having won the largest number of seats in federal elections last October. He abandoned efforts to form the next government in June.

His followers gathered facing the Victory Arch, a monument erected during Saddam Hussein’s regime to commemorate the Iran-Iraq war and for holding military parades.