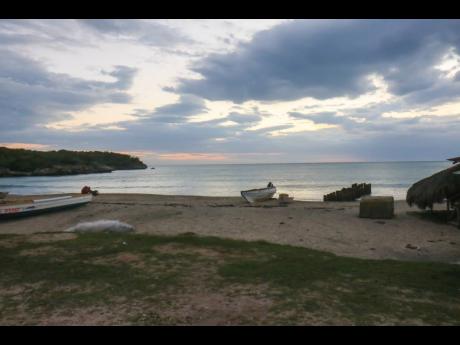 With the discovery of an array of Taino artefacts in Great Bay, St. Elizabeth, Minister without portfolio in the Ministry of Economic Growth and Job Creation, Matthew Samudasaid he would like the area to be protected from illegal mining in order to preserve the country’s pre-colonial history.

Great Bay became the centre of attention earlier this year after it was discovered that illegal sand mining had left an environmental threat to human lives, residents and to commercial operations, especially in periods of heavy rainfalls that can result in flooding.

According to Samuda, flooding could happen after more than 100 metres of sand dunes which were created over 1,000 years ago have been destroyed from illegal sand mining.

“It is a very sensitive area I think should be one of our ecologically sensitive declared areas within the legislation that is coming,” Samuda said of Great Bay where several hundreds of Taino artefacts and caves, with paintings, were discovered.

ONE OF THE LARGEST

Samuda said the Great Bay Sand Dune and wetland area is one of the better ecosystems found in Jamaica, and is one of the largest on the island and extends approximately two kilometres to the coastline.

“I believe this is a great model for eco-tourism so that persons can come and see the beauty that is Jamaica. I think this is something that is worthy of protection which is why we will be taking some steps,” he said.

Sand dunes are formed by an accumulation of sand grains shaped into a mound or ridge by the wind under the influence of gravity. Sand dunes are comparable to other forms that appear when a fluid moves over a loose bed, such as subaqueous, on the beds of rivers and tidal estuaries and sand waves beneath shallow seas.

Dunes are found wherever loose sand is windblown in deserts, on beaches, and even on some eroded and abandoned farm fields.

Prime Minister Andrew Holness said the preservation of Taino artefacts found in the area will serve as a bridge to connect Jamaicans with their ancestral tribes who lived here before colonialism. He urged the residents of Great Bay and its surroundings to do everything in their powers to preserve these historical values.

“The artefacts are the physical connection to history – so much can be told from people who are trained in this field, all kinds of information can be discovered being so close to this,” Holness said during a tour of St. Elizabeth recently.

“It is like making a connection, there is a genetic connection somewhere,” he added. As we make the connection and as we celebrate Emancipation and Jamaica 60, these artefacts would have been from the inhabitants of the island before our ancestral forefathers were brought here from Africa – so in a sense, you could say that these were the pre-colonial inhabitants, the original inhabitants of the island and they have met a brutal end as a result of the variables of the very brutal type of colonialism and slavery that was practised.”

Holness said there are Taino populations still exists in the region. However, he was not immediately sure if in Jamaica there are any population remaining.

“The theory and understanding are that some of the Tainos would have found refuge or merged with the Maroon population in the Cockpit Country and other areas across the island,” he said.