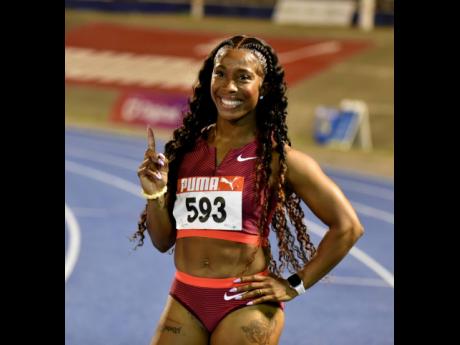 Jamaica’s Shelly-Ann Fraser-Pryce and Shericka Jackson continued their excellent year on Monday, as they won the penultimate World Athletics’ Continental Tour respective 100 metres and 200 metres at the Gyulai Istvan Memorial meet in Hungary.

Fraser-Pryce clocked a meet record of 10.67 seconds to defeat Tamari Davis of the United States of America (USA), who did 10.92 with Mujinga Kambundji of Switzerland getting third in 10.99.

Jamaica’s other runners in the event, Natasha Morrison and Briana Williams finished fifth and sixth respectively. Morrison did a season best of 11.06 seconds with Williams doing 11.14.

In the women’s 200 metres, Jackson eased to victory in an impressive 22.02 seconds, which is just six-hundredths outside the meet’s record.

Both Jackson and Fraser-Pryce are having an excellent season, with the highlight so far coming at the World Championships in Eugene, Oregon,where Fraser-Pryce successfully defended the women’s 100 metres title with Jackson winning the 200 metres.

In the men’s 110 metres hurdles on Monday, Broadbell ran through to beat World Championships winner, Grant Holloway, who was leading the event, until he clipped the ninth and penultimate hurdle and lost his footing. Both Broadbell and Holloway had identical times of 13.12 seconds as USA’s Daniel Roberts was third in 13.13.

Yohan Blake and Ackeem Blake finished fourth and fifth in the men’s 100 metres in 10.03 seconds and 10.05 respectively. USA’s athletes took the top three spots with Marvin Bracy winning in 9.97 seconds, as Trayvon Bromell and Elijah Hall got second and third respectively in the identical time of 10.01.