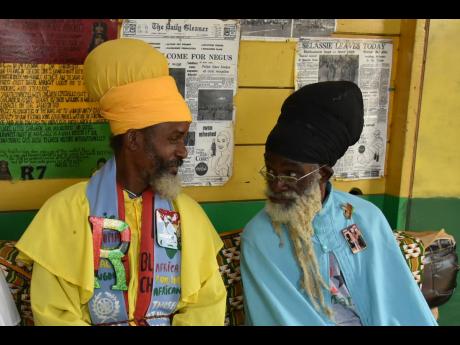 Kenyon Hemans/Photographer
Rastafarian Priests Christopher Morant (left) and Trevor Stewart talk about their opposition to the celebration of Jamaica’s Independence.

Rastafarians from The Ethiopia Africa Black International Congress Church in Bull Bay, St Andrew, are not caught up in the festivities as the island celebrates 60 years of Independence from Britain.

The leaders of the church believe that Jamaicans, many of whom are descendants of Africans brought to the island as slaves, should be ashamed of celebrating Independence, saying that the island was not yet free.

Additionally, the priests argue that Jamaica was originally owned by Arawaks and so descendants from Africans could not be independent in another man’s country.

“A lion born in an alligator pond is not an alligator,” Priest Trevor Stewart told The Gleaner last Thursday.

“We were taken here forcibly in the Western Hemisphere by the Europeans and white world, and they took us here down at this hell-hole called Jamaica, and we’ve been agitating from that time to now for a return legally with compensation back to our motherland,” he said.

The elderly priest insisted that members of his church would not be staying here in Jamaica, saying they were being kept in the island against their will.

The group argued that with the help of international human rights groups, they have been appealing since 1967 for repatriation.

Even though the group does not celebrate Independence Day, they join in festivities for Emancipation Day.

He, too, said that the Rastafarians were being “held here as captives”.

“Mi a agitate for I and I to go home, but the Jamaica Government is holding us back through their ways … . We want to go home! Every day we ask for that, but it is the Jamaican Government [which needs] to lobby as a government for our going home and dem don’t,” Morant said.

Stewart said documents were presented to former Prime Minister Hugh Lawson Shearer, when he was minister of external affairs, to allow the Rastafarians and their believers passage back to Ethiopia.

On the grounds of their church, flags of various African nations with which they identify are flown.

Notably absent was the flag of Jamaica.

The priests predict that global warming and a rise in sea level will sink Jamaica, which they contend is being led by a pharaoh-like government, and hope to leave the island before that time.