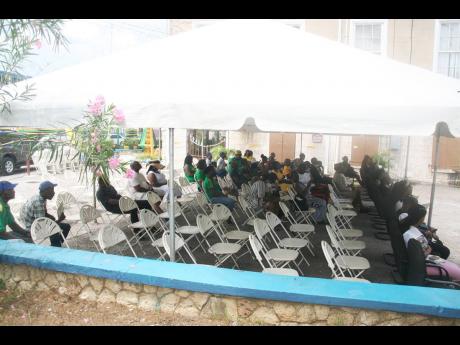 Bryan Miller
Most of the chairs provided for officials were empty, as many persons did not show up at the Jamaica 60 civic ceremony in the Sir Alexander Bustamante Square, Lucea, Hanover, on Saturday, August 6. 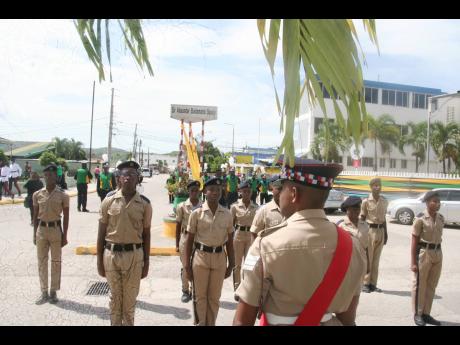 THERE WERE more empty chairs than occupied ones at the Jamaica 60 Independence civic ceremony in Lucea, Hanover.

The event, which was staged jointly by the Hanover Municipal Corporation (HMC) and the Jamaica Cultural Development Commission (JCDC), formed part of the activities to celebrate Jamaica’s 60th year of Independence.

Poor planning and coordination was very evident throughout the event, which was compounded by the late arrival of all the officials listed on the programme, and the no-show of some uniformed groups for the usual march-past parade.

Invitations issued for the event listed 9 a.m. as the starting time, while it asked for all attendees to be seated by 8:30 a.m. However, at 8:30 a.m., the chairs were just being laid out, and only the Heights Marching Band, which was booked to lead the uniform parade, was present.

Officials scheduled to participate in the programme all arrived late, with the two members of parliament (MP) for the parish, Dave Brown and Tamika Davis, for Eastern and Western Hanover, respectively, being the earliest of all the latecomers, arriving at 10 a.m.

A few frustrated guests had begun to leave the venue as the mayor of Lucea, Sheridan Samuels, arrived at 10:12 a.m. The custos of Hanover, Dr David Stair, and Superintendent of Police in charge of the parish, Sharon Beeput, arrived at 10:16 a.m.

When questioned about her lateness, the MP for Western Hanover, who was on the programme to deliver the Prime Minister’s message, stated that she had motor vehicle problems and was given a ride by MP Brown.

Brown stated that he was not properly informed about the function, adding, “that is Hanover for you”.

The JCDC parish manager, Shiyan Williams, told The Gleaner that all involved were properly informed about the starting time, so she could not explain their lateness.

“It is clearly printed on the invitations and ... advertised; and the persons I spoke with personally were all informed,” she stated.

Beeput, who arrived with the custos, in a police escort vehicle, argued that the usual time for the start of morning events like the civic ceremony in the parish is 10 a.m., and she unknowingly assumed that the event would be starting at that time.

“I don’t know if it is because, habitually, it starts at 10 a.m. why I was of that opinion, but I was eventually told that because of the COVID-19 situation they had changed to 9 a.m., of which I was not aware earlier,” she stated.

“But starting it at 10 a.m. was good, because majority of the persons involved were not here (at 9 a.m.), and then by the time we started, we were able to have a little better gathering, because the turnout was not very good at all,” she reasoned.

She told The Gleaner that she wondered if residents of the parish were not interested to celebrate their Independence, which would be a sad situation.

It was also evident that only members of the Jamaica Combined Cadet Force were present as a uniformed group to participate, along with the Heights Marching Band, in the march-past and inspection, to include the Custos.

Beeput told The Gleaner that the organisers were notified beforehand that due to reasons beyond their control, the police would not be participating in the march-past and guard of honour inspection. She said that she was in no position to say why the Jamaica Fire Brigade’s Hanover Division or the Jamaica Defence Force did not participate.

“This is a wonderful occasion for us as Jamaicans to really turn out and celebrate, and give God thanks that he has brought us so far; and we are expecting so much, so we are hoping that next year will be better,” she said.

One Hanover resident who turned up for the event and left when it became obvious that there was going to be a late start, told The Gleaner that he is fed up with the attitude of officials in the parish.

“Dem gwaan like dem a gods, and we must always de wait pon dem everytime and everywhere. But me fed up, and going a me yard,” he said as he left.

In contrast, the street dances that were held in Lucea and Hopewell on Saturday night were both well attended.