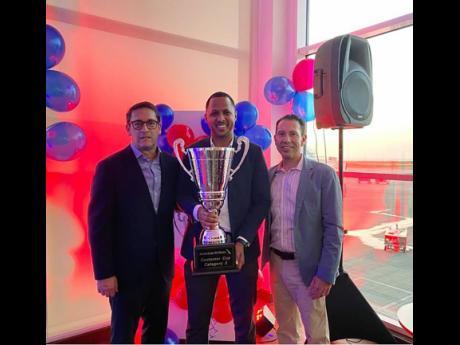 Contributed
American Airlines country manager for Jamaica, Damion Vanriel (centre) holds up the cup proudly. He is flanked from left: José María Giraldo, Managing Director of Mexico, Central America and the Caribbean and José A. Freig, vice president of International

For the fifth time, the American Airlines team at Sangster International Airport has copped the coveted Customer Cup Award for excellence in customer service.

The Montego Bay-based team was last recognised for outstanding service in aviation in 2017.

The Customer Cup, which is issued every quarter by the airline to stations throughout its network, is categorised by size of operation and is determined by customer feedback.

Situated in the tourism capital, the Sangster team interacts with more passengers than their Norman Manley International counterpart.

The recognition comes as the airline celebrates its 45th anniversary in Jamaica and implements plans to commence service at the Ian Fleming Airport in Oracabessa, St Mary, on November 5.

“We couldn’t be prouder of the incredible work that our teams in Kingston and Montego Bay are doing, resulting in an important recognition for our performance in the first quarter of 2022,” stated Vanriel.

To celebrate this recognition, José A. Freig, vice-president of international, and José María Giraldo, managing director of Mexico, Central America, and the Caribbean, travelled to Montego Bay to present the award to the team.

“This has been a banner year for our team in Jamaica, celebrating our Sapphire anniversary with a record operation that includes more frequencies, new routes and our third destination,” said Freig.

Earlier this summer, the airline, which is the island’s number-one carrier out of North America, launched a new Montego Bay-Austin route. In November, the aim is to deepen its footprint with visitors mainly to the resort town of Ocho Rios.

A number of the island’s most notable resorts are situated in St Ann and St Mary, namely, Sandals and Beaches, Moon Palace, Jamaica Inn, RIU, and the exclusive Golden Eye.

In 2022, American Airlines is operating at nearly 10 per cent more capacity in Jamaica compared to 2019 before the COVID-19 pandemic decimated the island’s tourism sector.

The airline’s operation includes three daily flights from Kingston to Miami and up to 12 daily flights from Montego Bay to Charlotte, Dallas/Fort Worth, New York, Miami, Chicago, Philadelphia, Austin, and seasonal service to Boston.

As of November, for its third Jamaica destination, under the code OCJ, the airline will operate twice weekly from Miami to the St Mary airport.