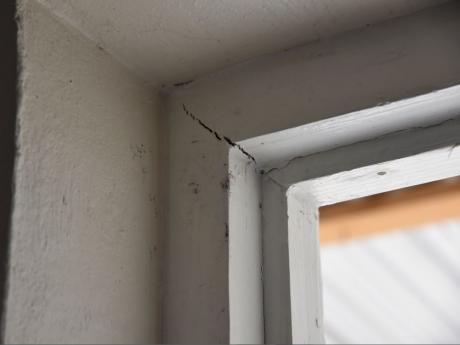 Homeowners at Twickenham Glades, St Catherine are furious as cracks are already appearing in door frames and walls, ceilings have begun to bulge, and tiles and vanity units are falling from the walls. - Nicholas Nunes photo.

The National Housing Trust (NHT) says its contractors will be redoubling their efforts over the next month to address defects to houses at Twickenham Glades in St Catherine.

Residents have complained that they have been suffering less than a year after receiving their properties.

The NHT presented the keys to 110 two-bedroom, single-storey duplex houses to residents in December.

But the new homeowners were left fuming after discovering defects which, they say, have not been addressed by the state agency even after months of complaints.

The challenges reportedly include underground leaks that have resulted in hefty water bills for some residents, roof leaks, swellings, indentations, and strips, flooded homes, and streets during heavy rainfall.

They also complained about wall and window cracks, defective doors, including front, back cupboard, and closet, and termite infestation.

In a statement today, the state agency indicated that it has been working with residents to address the defects and has arrangements with the responsible contractor to undertake the repairs.

“In fact, some of the issues reported … have already been addressed. Nevertheless, there are outstanding matters which the NHT is committed to correcting,” said a spokesperson.

“The NHT continues to communicate with residents through its marketing after sales team and apologises to them for any inconvenience caused by the delay in effecting repairs,” added the spokesperson.