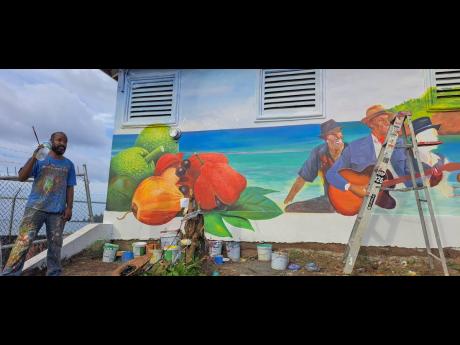 A MURAL depicting iconic Portlanders, such as late heavyweight boxer Trevor Berbick and the Jolly Boys Mento Band, has been met with strong criticisms and rejection from some residents who are upset about the location of the portrait.

The mural, which is being painted on the outer walls of the public sanitary convenience in Port Antonio in the vicinity of Foreshore Road, has been labelled as being disrespectful to the personalities.

“Nothing is wrong with the painting, but the location is bad. It is a poor decision by whomever gave permission to do such artistic work, especially on a toilet area,” commented a resident, who gave his name only as Alvin, of a Berrydale address in the parish.

The Gleaner has learned that the mural is a part of an initiative undertaken by Member of Parliament for Eastern Portland Ann marie Vaz to beautify the town, as part of an islandwide initiative to commemorate Jamaica’s 60th anniversary of Independence. This has not been confirmed by Vaz, whose phone went unanswered when efforts were made to contact her.

But Mayor of Port Antonio Paul Thompson argued that the mural is a brilliant idea, and that it is probably being blown out of context by some, who he accused of being too politically corrupt to realise or see the true meaning of the creative expression.

“The painting is clearly showing some of Jamaica’s favourite foods, ackee and breadfruit, along with some of Portland’s iconic figures and heroes,” said Thompson.

“I see it as a wall, and I didn’t know it would have that impact on the residents. But the area (Port Antonio) is a PNP area (People’s National Party) area, so that kind of negative response and comment is always expected. It is rather unfortunate that politics is now coming into play, but that’s only natural, given the kind of political climate that we have in our country. And everyone has a right to their own opinion. But I think it was well-intended and it is merely showcasing our heroes of the parish,” he concluded.

The mural was last week defaced, with black paint splattered all over it. The defacement was confirmed by the police, who are said to be investigating the matter.