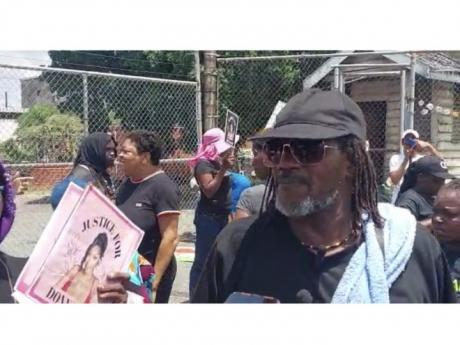 Family members and friends of Donna-Lee Donaldson have vowed that they will not stop protesting until justice is served.

Family members and supporters of missing social media influencer Donna-Lee Donaldson this morning protested outside the Kingston and St Andrew Parish Court where Constable Noel Maitland made his first appearance.

Maitland is charged with the murder of his 24-year-old girlfriend.

The court was told that the case file is incomplete and the policeman was remanded for a bail application on August 22.

Lugg expressed dissatisfaction that several documents in the case were outstanding.

He was also upset that the family was not told about today's court appearance by the police.

Lugg said, “Is the media mek we know him a come a court. We nuh get no call from the police or nobody. When dem charge him dem come a mi yard.”

And Lugg took issue that a bail application is to be heard for the policeman at the next sitting.

“Dem shouldn't even [think to] grant him bail. He should be remanded. What kind of bail? Alright, you see when the 22nd come, unuh [media] get very busy.

“Mi nuh find my niece yet and him nah talk. A just anger me have inna me right now,” Lugg said.

Last week, family members and friends of Donaldson declared that they will not stop protesting until justice is served.

Maitland was charged with murder on August 2, however, Donaldson's body has not been located.