Rio Cobre gets all clear as fish kill recovery begins 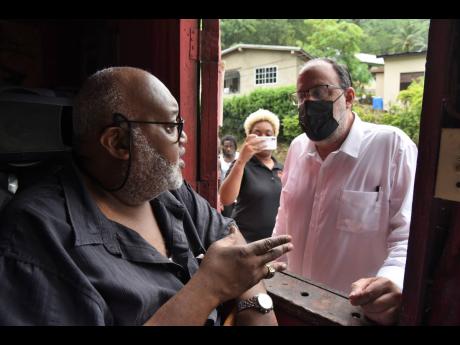 Ian Allen/Photographer
Opposition Leader Mark Golding (right) listens as Gareth Campbell, of Kent Village, talks about the recent chemical spill and fish kill in the Rio Cobre during a tour on Friday, August 5. Bauxite company Windalco has been blamed for the spill. Windalco has denied the claim.

The water quality in the Rio Cobre has been declared suitable for domestic and other use more than a week after effluent contaminated the river, killing hundreds of fish.

“Since the spill, we have been taking daily samples, and since yesterday, normalcy has returned,” Davis said of the August 10 assessment.

The news will be welcomed by hundreds of farmers, householders, and fisherfolk whose lives and livelihoods have been badly affected by the spill.

Besides an order to stop fishing, the NWC had shut off its operations that tapped the Rio Cobre – a major source of water for communities in St Catherine and St Andrew.

With the new academic year weeks away, Kent Village resident Christopher Thompson has been pondering the future of his two children.

The fishmonger is one of dozens of fisherfolk affected by the chemical spill.

“When mi come out here, a some big eel and perch mi see a float and froth pon di water. Although we hear some stories ‘bout money, people like me need help now,” said the despondent dad.

Opposition Leader Mark Golding has called for an overhaul of the Natural Resources Conservation Authority Act, which he said is no longer relevant and does not reflect modern-day reality.

“The fine under the NRCA Act is a maximum of $50,000. This is miniscule and is unlikely to be a deterrent for multinational companies such as Windalco,” Golding said during last Friday’s tour of Kent Village in the Bog Walk Gorge.

“This spill is the fifth such incident in five years. It is a shame. It happened even with two matters being prosecuted in the court.”

Windalco has insisted that it is not to blame for the fish kill.

The opposition leader charged that Windalco would have cauterised the years-long issue of overflowing effluent if the law governing their operations had teeth.

He also questioned the independence of the National Environment Planning Agency, which operates out of the Office of the Prime Minister. Golding believes its coexistence with industry-related organs like the Ministry of Economic Growth and Job Creation is a conflict of interest.

Golding said that the destruction of fauna in the Rio Cobre could have far-reaching effects.

“While a farmer decides to assist us with fish to put in the river to replenish the stock, the damage is already done,” Golding said. “The scientists said it will take up to a year for a level of normalcy to return to the lives of these residents who depend on the river for their survival.”

Opposition Spokesperson on Climate Change, Land and the Environment, Sophia Fraser-Binns, described as inadequate the Government’s pledge to use the more than $100,000 performance bond draw-down from Windalco. She said that farmers, fisherfolk, and householders were not yet able to fully quantify the economic fallout.

“I think we need a tribunal to be set up to deal with environmental issues as this is among others that we are facing nationwide,” the senator said, adding that communities and livelihoods would deteriorate amid prolonged litigation.

St Catherine North Central Member of Parliament Natalie Garvey said that her constituents, especially those in Kent Village, had for years been afflicted financially, emotionally, and physically from environmental disaster in the Rio Cobre.

Hinting at classism, Neita Garvey said the continued contamination of the natural environment would not be tolerated in an upscale area.

Windalco was expected to be charged for breaches under the Wild Life Protection Act after an investigation by the NEPA found that the bauxite company is responsible for the fish kill.