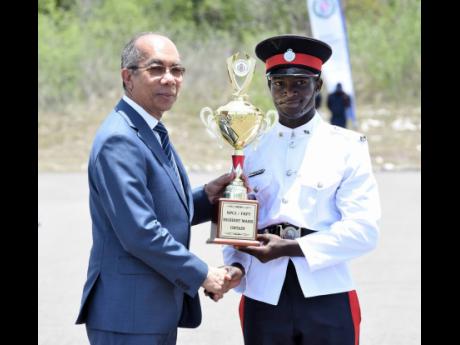 Ian Allen/Photographer
National Security Minister Dr Horace Chang (left) presents Constable A.J. Wilson with a trophy for attaining the highest mark among the 120 recruits of Batch 136 during their passing out parade at the National Police College of Jamaica in St Catherine on Thursday.

Constable A.J. Wilson, who graduated Thursday as the top performer from a group of 120 new police officers, said he was overwhelmed at receiving the top honour.

“The journey has been rough,” Wilson admitted, but credited the hard work of the instructors, who willingly provided guidance even on their days off.

“It is a blessing to see that out of 120 persons from this batch, I came out on top,” Wilson told The Gleaner at the Batch 136 passing out parade at the National Police College of Jamaica in St Catherine on Thursday.

Describing himself as a man of faith, Wilson, who entered the police force with six Caribbean Secondary Education Certificate subjects and another four at the Caribbean Advanced Proficiency Examinations level, said he intends to put God first in the execution of his duties.

“My aim is to have Christ as the centre of my life and go out every day and perform my policing duties to the best of my ability,” he said, adding that the road ahead could be rough but he intends to lean on his colleagues and also support them in all aspects of the job.

“However long I serve, I intend to make it some good years,” said Wilson, as he calls on his countrymen to “let Jamaica just be the beautiful place we know it to be”.

“We did 1,260 last year, which is the largest we have done for many years, so we now have a net gain of 800 last year, and this year, we are expecting 1,000, bringing the force up over the next year or two to the establishment level of 15,000,” Chang told The Gleaner.

“We also have an increasing level of high-quality recruits, who are graduates from tertiary institutions and students out of high schools with more than the required number of subjects – a good cross-section of young Jamaicans who have entered the force to enhance the skill set,” Chang added.

The national security minister said that a look will be taken at the special district constables, who, while not part of the police establishment, are trained by the police but attached to other agencies.

“That’s an area we are looking at to see where they can play an expanding role, especially in areas where trained police officers are not required,” said Chang, adding that the Government was also mulling over making adjustments to the functions of district constables, who are part of the police establishment.

Assistant Commissioner of Police Devon Watkis, training branch director at the National Police College of Jamaica, touted the achievements of the new officers.

“These men and women are among the finest that came out of this institution. They came in as ordinary men and women, now we send them to you as fully trained police officers ready to fight crime and keep communities safe,” Watkis said of the new officers, who were cheered on by family and friends as they executed a dazzling display of different formations.