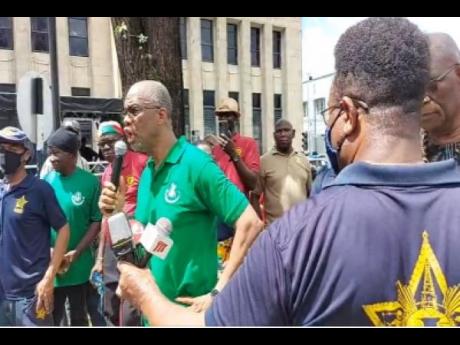 PORT OF SPAIN, Trinidad, CMC – Thousands of workers took to the streets in the capital on Friday deploring the Keith Rowley government's offer of four per cent salary increase as an “insult” and vowing to step up their actions in the coming days.

The workers grouped under the umbrella Joint Trade Union Movement (JTUM) said they were disrespected by the government's four per cent offer as articulated by the Chief Personnel Officer (CPO) as the final offer.

President of the Public Service Association (PSA), Leroy Baptiste, told the marches “we have a war to win and it could only be won with you.

“That they could come here and just tell you take it or leave it. Comrades we have to tell them take it or leave it because we ain't taking no four per cent,” Baptiste said, as workers rang bells and urged more industrial action to force the government to increase its offer.

“We have to ensure that when the negotiations end, your stand of living is improved, that the retirees will be treated with equity, fairness and we must bring an end to the retrenchment of workers. We must stand up and fight…they are destroying this country…the gaps between the haves and the have nots is widening. That must come to an end,” Baptiste said.

The unions, including the PSA, the Trinidad and Tobago Fire Service Association, said that the CPO,  Dr Daryl Dindial had during the latest round of negotiations earlier this month offered a salary increase of four per cent.

Last month, Prime Minister Rowley told a news conference that it would cost the government an estimated TT$2.5 billion (One TT dollar=US$0.16 cents) in back pay alone to cover the four per cent wage increase.

The unions had originally rejected an initial two per cent offer over an eight year period – 2014-2021.

“The offer has since been increased to four per cent over a six year period 2014-2019, which will cost government TT$2.5 billion in back pay up to June 2022, and be committed to a further TT$500 million, annually, just for the civil service, teaching service, defence force, protective services and daily rated workers,” he said.

“To this must be added the cost of a wage increase for statutory authorities and state enterprises, which will increase the total cost of a four per cent increase by as much as a further 50 per cent. Should negotiations be settled at eight per cent, those figures will literally double, taking back pay to over five billion dollars and the annual recurrent cost to over TT$1.5 billion,” Rowley added.

Rowley said he is “a bit puzzled” by the “strong language” of labour leaders in their push back to the wage offers, which did not “reflect, either normal industrial relations practice, or the economic realities facing” the country.

In June, Finance Minister Colm Imbert, said whatever amount the back pay is, the government would have to borrow to cover it.

But as he addressed the protestors on Friday, JTUM president, Ancil Roget, who is also head of the Oilfield Workers Trade Union (OWTU), said he was pleased with the turn out.

“Almighty God has spared us with good weather because he knows out fight is a just one. He knows our fight is a fair one because when we walked through the streets of Port of Spain today, I observed carefully all of those persons selling on the sidewalks and those persons who came out of the offices…all of them barring none of them were in approval with our being on the street,” he said.

Roget recalled that there were workers who originally had been against the industrial action “but today because of circumstance not one person is against what we doing because when we do that we provide a voice for those who don't have a voice."

“Our fight is for a decent wage, we don't want four per cent, we are not going to accept retrenchment …but our fight goes way beyond that boundary, our fight goes for the small man…,” he added.