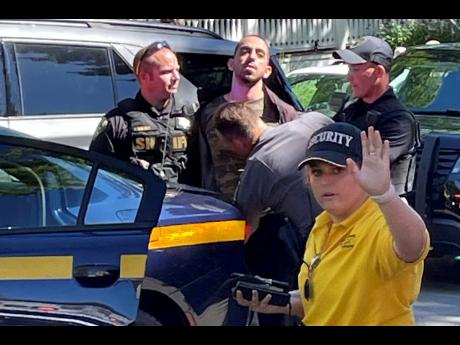 AP
Law enforcement officers detain Hadi Matar, 24, of Fairview, NJ, outside the Chautauqua Institution, Friday, August 12, 2022, in Chautauqua, NY. Salman Rushdie, the author whose writing led to death threats from Iran in the 1980s, was attacked and apparently stabbed in the neck Friday by Matar who rushed the stage as he was about to give a lecture at the institute in western New York. 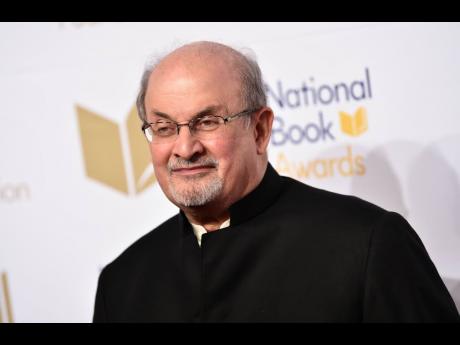 Salman Rushdie, whose novel The Satanic Verses drew death threats from Iran’s leader in the 1980s, was stabbed in the neck and abdomen on Friday by a man who rushed the stage as the author was about to give a lecture in western New York.

A bloodied Rushdie, 75, was flown to a hospital and was undergoing surgery, police said. His condition was not immediately known.

Police identified the attacker as Hadi Matar, 24, of Fairview, New Jersey. He was arrested at the scene and was awaiting arraignment. State police Maj. Eugene Staniszewski said the motive for the stabbing was unclear.

An Associated Press reporter witnessed the attacker confront Rushdie on stage at the Chautauqua Institution and punch or stab him 10 to 15 times as he was being introduced. The author was pushed or fell to the floor, and the man was arrested.

Dr Martin Haskell, a physician who was among those who rushed to help, described Rushdie’s wounds as “serious but recoverable”.

Event moderator Henry Reese, 73, a co-founder of an organisation that offers residencies to writers facing persecution, was also attacked. Reese suffered a facial injury and was treated and released from a hospital, police said. He and Rushdie were due to discuss the United States as a refuge for writers and other artists in exile.