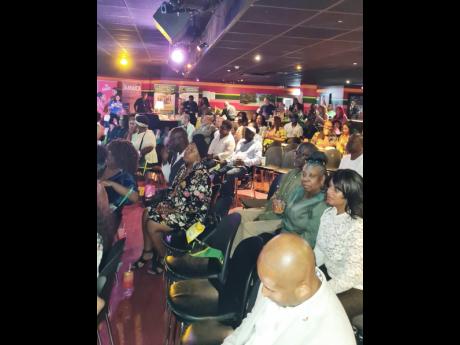 Contributed
A section of the audience which attended the opening night of Jamaica House in Birmingham on August 3.

One of the highlights of the Jamaica 60 Independence celebrations in the UK was the Jamaica House hospitality pop-up at the Glee Club in Birmingham City Centre, which provided five nights of Commonwealth Games watch parties and themed, live music entertainment.

The Jamaica Tourist Board (JTB)-sponsored venue was officially opened by the Lord Mayor of Birmingham, Councillor Maureen Cornish, and Jamaica’s Minister of Tourism Edmund Bartlett on Wednesday, August 3. It was accessible until Sunday, August 7, as part of JTB’s global initiative to celebrate the island’s 60th anniversary of Independence.

Both the Lord Mayor and Minister Bartlett delivered speeches on Wednesday to a full house, before the evening’s races and live entertainment.

During his speech, Bartlett praised the “powerful” Jamaican diaspora in Birmingham as a prime example of Jamaica’s shared indomitable spirit across the world. He spoke of how athletes Shelly Ann Fraser-Pryce, Elaine Thompson Herah and Shericka Jackson made him feel proud to be a Jamaican, to rounds of applause from the audience. Bartlett also formally invited the Lord Mayor to visit Jamaica.

The Lord Mayor, in her remarks, noted that over 50,000 people across Birmingham proudly proclaim their Jamaican heritage, exemplified by Sir Lenny Henry who carried the baton to Birmingham, and it was only fitting that Jamaica House should be in the city as Jamaica celebrates 60 glorious years of Independence.

Later that evening, there was an incredible atmosphere as the crowd cheered on Thompson Herah as she won the women’s 100m sprint. Celebrations continued into the night as the king and queen of UK lovers rock, Winston Reedy and Carroll Thompson, both delivered rousing performances.

The following night, crowds of enthusiastic young members of the diaspora came together to cheer on Rasheed Broadbell as they watched him race to gold in the 110m men’s hurdles, and then celebrated with dancehall and reggae from Docktor and Stylo G.

Friday night’s entertainment was dedicated to comedy, as White Yardie and friends left the audience in stitches with a variety of Jamaican skits and stand-up comedy. Saturday was dancehall night, with a showdown sound clash featuring Big John Newood, Lady Jennie P, Mikey Biggs and Junior Banton. The ‘Give Thanks and Praise’ gospel night, which featured Laurine Cato and Isaiah Raymond, brought down the curtain on a successful Jamaica House.