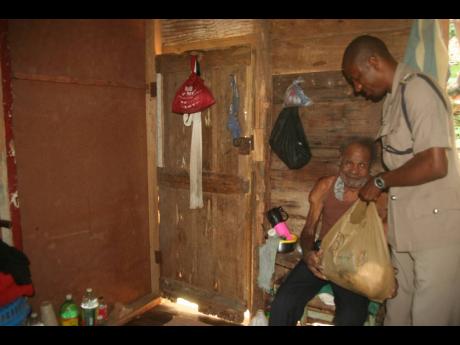 Contributed
A package being presented to Aston Shakes, who lives in the Cove area, who is blind. 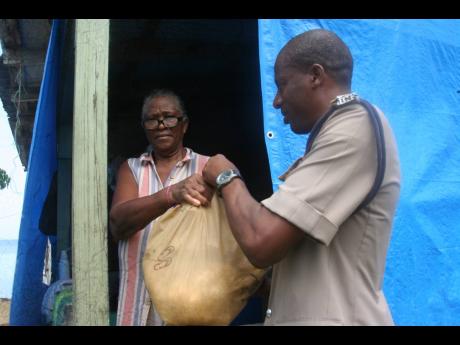 Contributed
A presentation of goods being made to Merlene Thompson by Inspector of Police Mervin Hodges.
1
2

Two persons in need of assistance, who reside in areas policed by the Jamaica Constabulary Force (JCF) officers who work out of the Green Island Police Station in Hanover, were made much happier individuals on Wednesday, August 10, as they were presented with gift packages filled with foodstuff and other household necessities, courtesy of the Green Island Police Officers Outreach programme.

The packages were presented to Aston Shakes, who lives in the Cove area and is blind; and Merline Thompson, who resides in the Dixon Wharf area and whose daughter and two grandchildren were murdered back in 2018.

In an interview with The Gleaner following the presentations, Inspector of Police in charge of the Green Island Police Station, Mervin Hodges, explained that, while the Hanover police implement an outreach programme through their Lucea headquarters, the officers in the Green Island station found it necessary to do a programme of their own, based on their experiences in traversing the 37 communities under their policing jurisdiction.

He had high praise for Police Inspector Sharmaine Baker, who he said initiated and worked hard towards organising and implementing the localised outreach programme in the Green Island area.

“It (the programme) arose out of the needs we identified during our policing of the 37 communities under our jurisdiction, where we observed that there are several indigent residents in some of these communities,” he stated.

He pointed out that, whereas the outreach programme started in 2018 with a grand assistance progamme launch, activities under the programme slowed down shortly after, as it was affected by the arrival of the COVID-19 pandemic.

“Over the years, several agencies and organisations such as the Red Cross and other stakeholders came on board in partnering with us to render the necessary assistance,” he said.

He said that beneficiaries under the outreach programme are identified based on information reaching the Green Island police, following community meetings and walk-throughs in the many communities, and a selection is made based on the vulnerability of the identified individual.

Both beneficiaries who received packages on Wednesday expressed gratefulness, stating that it has come at a time of great need for them. “God bless unnu, a just dis morning me pray fi some help, and out a di clear blue God send unnu to me assistance. Dis yah mek me faith stronger,” Shakes stated on receiving his package.

“We select beneficiaries based on their conditions, we know we cannot assist everyone in need, but we do the selection on a case-by-case basis, trying to identify the most vulnerable of them all,” Hodges said.

He expressed pleasure at the fact that all the police personnel in the Green Island area are willing to play a part in the programme, whenever called on to do so.