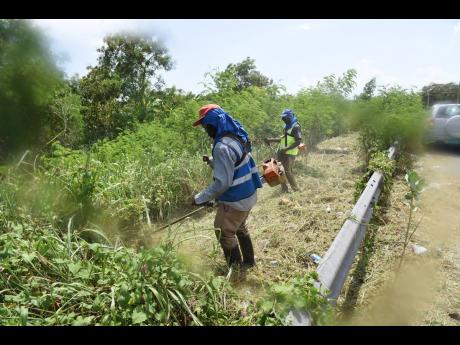 A MAJOR clean-up exercise has begun along the Dyke Road in St Catherine, as part of the national ‘Clean Jamaica’ campaign being implemented by the Government.

The exercise, which commenced on Thursday, is expected to last for one week and will see the removal of overgrown vegetation in the area. The work will focus on both sides of the road from the Ackee Village up to the train line.

“This area is what is deemed the critical area of the Dyke Road that needs immediate response and that is what we are offering right now,” said Minister of Local Government and Rural Development Desmond McKenzie, who observed the exercise.

He informed that the clean-up is in response to concerns from the Jamaica Constabulary Force (JCF) regarding the condition of the area, which, in recent times, has been used as a hide-out for criminals and where illegal weapons have been discovered.

“The work is being coordinated by the National Solid Waste Management Authority (NSWMA), working closely with the member of parliament and councillor for the area and getting the support from the security forces,” said McKenzie.

Meanwhile, he noted that the national clean-up campaign, which began prior to the Independence celebrations, will continue.

“This programme will go on. We will take the programme right across other parts of the country, but we want to focus today on the urgency and the need to have this area clean,” he added.

Minister without Portfolio in the Office of the Prime Minister, with responsibility for information, Robert Morgan, emphasised the national significance of the clean-up exercise along the Dyke Road.

“Thousands of cars all across the island and Jamaicans commute through this area. Even though it is important for St Catherine, it’s a major artery into Kingston.

“That’s one of the primary focuses of the national clean-up campaign – looking at areas that impact Jamaicans in general and also communities in particular,” he added.

Member of Parliament for St Catherine East Central and State Minister for Culture, Gender, Entertainment and Sport Alando Terrelonge, thanked the various stakeholders involved, noting that the clean-up “is a big win for the people of Gregory Park and East Central St Catherine”.