Ashley Anguin
Carleen Coates-Russell (fourth from right, standing), founder of the Global Hands Foundation, poses for a photo with members of her team during the foundation’s mental health seminar and health fair at the Bounty Hall New Testament Church of God in Bounty Hall, Trelawny. 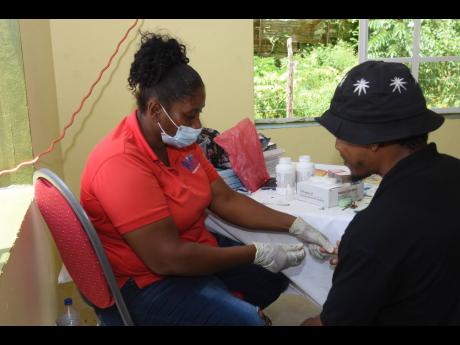 The all-day event, which was seeing its third annual staging in Jamaica, saw the foundation’s 20 members giving mental health screening and education, targeting more than 500 residents, in collaboration with representatives from the Trelawny Health Services. They also provided medical supplies such as wheelchairs; services such as blood pressure and HIV tests, and even face-painting for the children in attendance.

Lenord Johnson, 74, expressed immense gratitude for the professional care given to him by doctors at the function, as well as for the chance he had to get a blood pressure test for himself, and a walking stick for his wife.

“This event came to me like things I had never heard before, and I appreciate those things because I do not know if I will ever hear any of those things again. I give thanks for what I heard, and for whatever is going on here now,” Johnson told The Gleaner. “I received a walker for my wife because she could not come, because pain is killing her. So I asked for the walker to carry home to give her, and I got a pressure test for myself as well.”

Hyacinth Lawrence-Walker, 64, said that while the health fair was not what she had expected due to its focus on mental health education, she appreciated the opportunity to learn more about the subject.

“I was looking to see the medical doctors, but I came and saw what was going on here and realised the psychiatrists and the rest of the doctors had a lot to say to us on mental health – about what has been disturbing some of our minds that would cause us to have illnesses and all those things, and what we can do to prevent those things from happening. I just wish this could happen yearly, and I wish they could come back and let us meet them again and have more of what they have given to the community,” said Lawrence-Walker.

While this year’s trip to Jamaica is the third one for the Global Hands Foundation, the group’s members have advocated for mental health awareness since the organisation’s founding in 2016.

Carleen Coates-Russell, the foundation’s founder and team leader, told The Gleaner that her experience as a mental health nurse over 15 years has led her to realise that awareness on the subject is needed to combat the lingering taboo surrounding mental illnesses.

“People are opening up to talk to us, and people are coming for help, because we are not just focusing on mental health. We have care packages, and we brought wheelchairs, diapers and medical supplies for people who cannot afford such things,” Coates-Russell added.