Nellie Stuart – batting at 100, and a pillar of strength 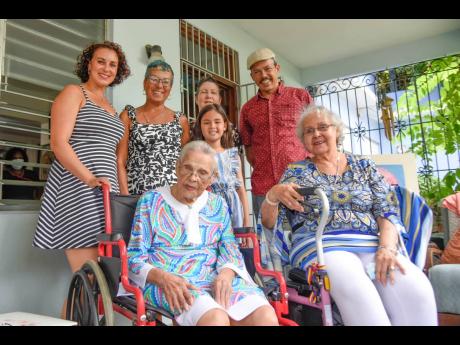 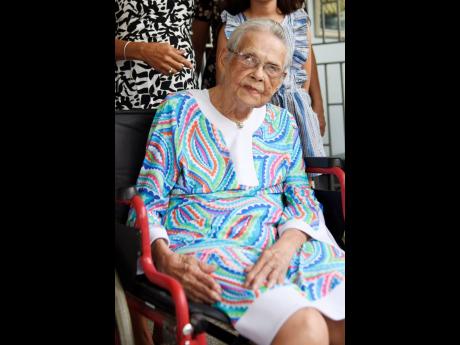 Nellie Marguerite ‘Madge’ Stuart, who turned 100, is looked up by her family as a tower of strength.

Born on August 12, 1922, Stuart celebrated her birthday surrounded by family and friends. Her daughter, Jeanne Seaton, told The Gleaner that her mother is known to be a caring person.

“Extremely generous and loving she has been all these years. She was an excellent guide to life generally; how we should deport ourselves, how we should deal with things. She brought us up from infancy. She was always kind and gentle ...” she said. “She didn’t take mischief if it was a problem, she’d straighten them out.”

Stuart’s grandson, Jason Worton, shared the same sentiments, adding that his grandmother also taught the family to be financially conscious.

“She was firm with us. She was young during World War II and there was lots of rationing and times were hard. So, I think like most people in her generation she was frugal. She wouldn’t let things go to waste and she saved. I remember she taught me to be mindful of my spending and save my money,” he said.

Seaton told The Gleaner that her mother’s career took different paths as she first began working in a lawyer’s office as a typist before moving on to complete one year of teacher’s training at the College of Arts, Science and Technology, now known as the University of Technology. Stuart then began working at St Hugh’s High School, teaching typing and shorthand to senior students.

What she taught her family about, however, was inner strength, her grandson told The Gleaner.

“I think the greatest lesson grandma taught me, even more through action and example than anything she ever said to me was the value of strength. Not just strength like brute strength; like strength and grace. I think that is resilience there, and that is why she’s still here. My two grandmothers are two of the strongest people I’ve ever known,” Worton said.

Her profession had influenced the rest of her family as many of them also turned out to be teachers.

With her mother unable to talk in her old age, Seaton said she appreciated the moments she had with her mother before when she was still a teacher, both in home and out of it.

Seaton continued: “She’s still here in the flesh, but she’s not communicating with us in any way. And yet, her caregiver said she knows exactly what’s going on around her. It’s hard to see her like this, remembering what a tower of strength she was.”

Stuart was also lauded as a great mother and grandmother to her family.

“She was always there for us. If we had a problem, she would help but she wouldn’t take over and tell us what to do. She would more guide us with it until we solved the problem. She was very wonderful, my mother, always loving,” Seaton said.