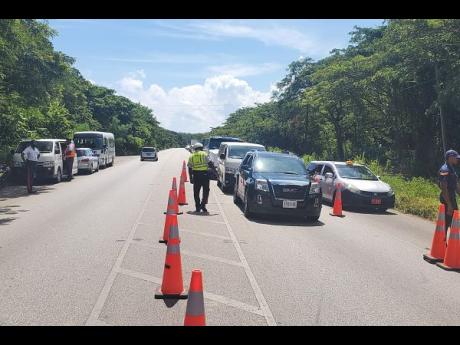 Three people were arrested and dozens of summonses served as the St. Ann police continued 'Operation Leviticus' in the parish on Tuesday.

Under the initiative, aimed at restoring law and order to major towns and communities in St. Ann, the police turned their attention to traffic on Tuesday, setting up several checks at different locations along the North Coast Highway.

Acting head of the St. Ann police, Superintendent David Whyte, said the police arrested three persons for breaches of the Dangerous Drugs Act, after they seized 55 pounds of ganja during the operation.

Tuesday's operation was carried out at known death spots along the north coast, including at Salem, just metres from the site of the two-bus collision on July 26 which caused multiple fatalities.

It comes as crime figures trend upwards, with the murder count for the parish, so far in 2022, showing a 32 percent increase compared to the similar period last year.