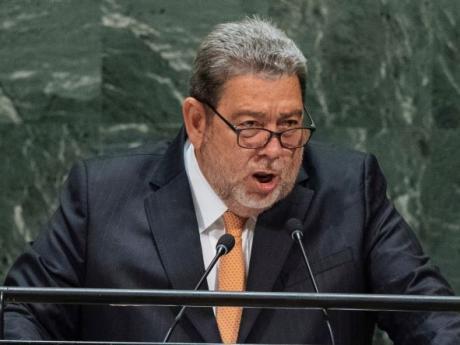 Gonsalves told teachers dismissed over the COVID-19 mandate to reapply for their positions because they "have nothing to lose by applying for your job". -File photo

(CMC) – Prime Minister of St Vincent and the Grenadines Dr Ralph Gonsalves is appealing to teachers who were fired last year for refusing to be vaccinated against the coronavirus (COVID-19), to reapply for their jobs.

“Put yourself in a possible win-win situation, apply for your job. It's not a trick… You can still pursue your case, but apply for your job,” he said, referring to the lawsuit that some public sector workers, through their unions, have brought against his government.

He told a news conference that the Ministry of Education had informed him on Monday that 55 teachers had reapplied for employment.

“Some of them have taken the vaccines and come abroad and others who are not vaccinated have applied for employment,” Gonsalves said.

However, President of the St. Vincent and the Grenadines Teachers' Union Oswald Robinson, on Wednesday, dismissed the prime minister's comments as propaganda.

He told the Caribbean Media Corporation (CMC) that the union's intelligence suggested that teachers who were hired on short contract had applied and the ministry told them that its priority was teachers dismissed over the COVID-19 mandate.

Gonsalves said that the Ministry of Education was ready to send to the Public Service Commission (PSC), which meets on Thursday, the names of those to be appointed to positions.

“They (PSC) had put yesterday as the deadline for applying. I've asked them if they can extend the deadline to the Monday (August 22) because I suspect that more teachers may wish to apply,” Gonsalves said, adding that being a party to the lawsuit does not bar a teacher from reapplying for re-employment.

“Anybody who gives you any advice and tells you that if you apply back for your job is some trickery or it's weakening your case which you have, tell them that Ralph say, that is political advice, that ain't legal advice,” said Gonsalves, who is also an attorney.

“That ain't legal advice. I don't know who's giving that advice. Please, listen to me on it. Now, don't let any vanities get involved; I don't have any vanities in this,” he said, adding that he does not know whether the legal challenge would end after the hearing in November or whether it would end up before the Privy Council, which could take three years.

“I don't know because I can't predict anything. All I know is that we were properly advised legally and we are satisfied that the position of the government is correct,” Gonsalves said, adding that it is open to dismissed teachers to say that the government's position was wrong.

“But all I'm saying to you, you have nothing to lose by applying for your job,” he said reiterating that teachers who are rehired would not be foregoing any previous benefit.