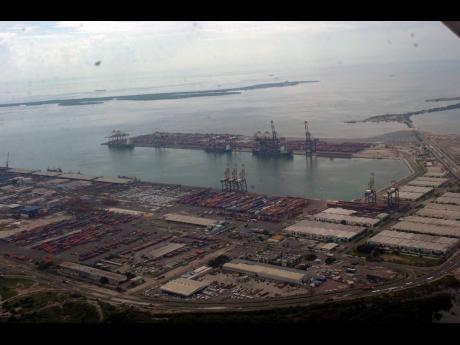 Ian Allen
An aerial view of a section of the Port of Kingston.

According to the Statistical Institute of Jamaica (STATIN), the sharp rise in the island’s import expenditure was due to increased spending on all subcategories of goods inflows.

A release from STATIN on Monday said imports of ‘Raw Materials/Intermediate Goods’ totalled US$717.4 million, which was 31.8 per cent higher than the US$544.2 million spent during the corresponding period in 2021.

Jamaica’s five main trading partners for the review period were the US, People’s Republic of China, Brazil, Trinidad and Tobago, and Ecuador.

STATIN reported that total expenditure on imports from these countries increased by 40.5 per cent to US$1.45 billion and accounted for 62.3 per cent of total inflows.

This was largely due to higher imports of fuel from the US and Ecuador.

Meanwhile, the increase in export earnings was driven primarily by a 52.9 per cent hike in the value of exports for the category ‘Mineral Fuels’ during the review period. It said the country earned $77.17 billion (US$504.4 million) from exports over the corresponding period in 2021.

STATIN further said that domestic exports for the review period rose by 1.4 per cent to US$438.9 million, which accounted for 85.9 per cent of total outflows. It said this mainly resulted from a 43.3 per cent rise in manufacturing industry exports.

The top five destinations for Jamaican products were the United States of America, Canada, Puerto Rico, the Russian Federation, and the United Kingdom.

Exports to these countries, which increased by 35.5 per cent to US$424.2 million, were largely attributed to higher outflows of fuels to the US.