Mayor wants a Bustamante statue in Lucea square too 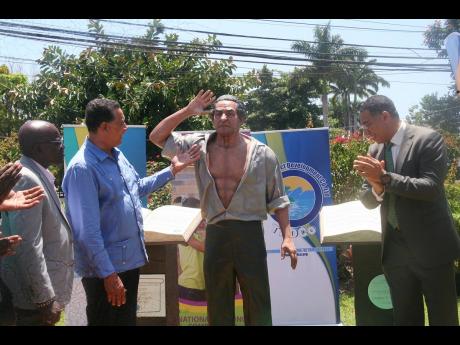 Bryan Miller
Prime Minister Andrew Holness (right) participates in the unveiling of a statue of National Hero Alexander Bustamante on the grounds of the Hanover Parish Library in Lucea on Friday. Also in photograph are Lucea Mayor Sheridan Samuels (left) and Minister of State Homer Davis.

MAYOR OF Lucea and chairman of the Hanover Municipal Corporation (HMC), Sheridan Samuels, says that a similar statue of the likeness of National Hero Sir Alexander Bustamante, which was unveiled on the grounds of the Hanover Parish Library, should be in the town square of the parish capital, Lucea.

He said that the HMC is taking action to get it done.

While bringing greetings at the unveiling ceremony, Samuels argued that with statues, buildings and roadways across the country already named in honour of the former prime minister, it is not too late for a statue of him to be placed in the Lucea town square, which is already named Sir Alexander Bustamante Square. He said such a task should have been accomplished in the parish more than a decade ago.

“As proud Hanoverians, whether by birth, marriage or migration, we should all know about the life of this great man and celebrate him, not only as a national hero, but also as a son of the soil (of Hanover),” he stated.

“As the HMC continues to honour Sir Alexander Bustamante, plans are in place for a statue to be erected in front of the (HMC) building, but we are having some challenges,” Samuels stated.

“I came here today for the Tourism Product Development Company (TPDCo) to continue the good work that they have been doing, and assist the Municipal Corporation, in helping us in some way to put this statue of Sir Alexander Bustamante in the town square of Lucea, so that persons would at least know the (origin) of the name of the square itself,” he continued.

Hanover is the parish of Sir Alexander’s birth, residence and schooling in his early years. Each year the HMC, in collaboration with the Jamaica Cultural Development Commission, ensures that his life and legacy is remembered through a celebratory event on his birthday.

In an interview with The Gleaner following his presentation, Samuels emphasised that he is not seeking for the newly erected statue on the library grounds to be moved to the Lucea square, but instead, for a separate statue to be commissioned and erected in the town square.

“We in the HMC had passed a resolution there, for us to put a monument of Sir Alexander Bustamante, and also former Prime Minister P.J. Patterson, within that space, so that persons can recognise the space and know that it is the Bustamante Square, and secondly, display the two prime ministers that we have coming from the parish of Hanover,” he stated.

He pointed out that the resolution was passed about four to five months ago.

Questioned about the targeted time frame within which the HMC hopes to achieve the aim of the resolution, Samuels said that with the Jamaica 60 celebrations continuing until August 2023, it is hoped that it will be achieved before the end of the celebrations.

“We have to have Sir Alexander Bustamante there (in the town square) and also P.J. Patterson,” he emphasised.

Samuels said that his attendance at the unveiling proved beneficial, as he had the opportunity to meet the sculptor, and has established the necessary contact.

Describing the statue as an excellent piece of artwork, Samuels stated: “What I have seen here today shows me exactly what we want, so I spoke to the artist and we exchanged some information so that we can keep the ball a-rolling now.”

“I do not want next year (2023) to catch it (mounting of the statue in Lucea square), if next year catch it, it will be because of the speed with which the sculptor can do the work,” Samuels said.

The Sir Alexander Bustamante statue, along with two storyboards, which was unveiled by Prime Minister Andrew Holness, was designed and sculpted by Scheed Cole, director of Sculptural Elements and Construction 001 Limited. Information out of the TPDCo is that Sculptural Elements and Construction 001 Limited is a creative artistic company with about 20 years of experience providing sculptural solutions for attractions.

The statue was done at a cost of approximately $3 million.