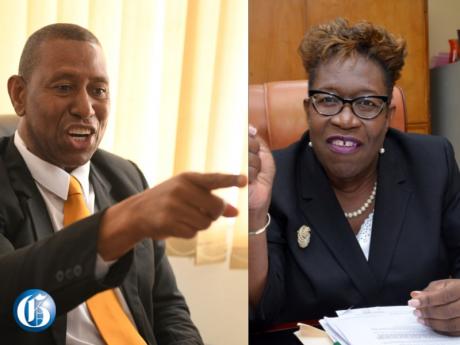 Thomas is the first prosecutor in Jamaica's legal history to be found guilty of professional misconduct. -File photo

The lawyer representing a government prosecutor recently found guilty of professional misconduct has accused Director of Public Prosecutions (DPP) Paula Llewellyn of throwing Sophia Thomas 'under the bus' by seeking advice on whether she can return to work.

Hugh Wildman says Llewellyn should be scrutinised for ending the fraud case that gave rise to Thomas' troubles linked to an attempt to tender fresh evidence.

Thomas recently resigned her secondment to the Turks and Caicos Islands following the adverse finding from the Disciplinary Committee of the General Legal Council (GLC), the Jamaican regulatory body for the legal profession.

On Tuesday, Llewellyn said her office received correspondence from Thomas on Monday indicating her desire to return to her post as assistant director of public prosecutions.

The DPP said given the issues, she referred the matter to the Public Service Commission.

Wildman warned that any attempt to prevent Thomas from returning to her job as assistant director of public prosecutions will be challenged in the Constitutional Court.

"Llewellyn is out of place to have done what she did, by publishing Ms Sophia Thomas' correspondence indicating her desire to return," the lawyer argued, adding that Thomas "did absolutely nothing wrong".

"No findings by the General Legal Council, an inferior tribunal, in this matter can affect Ms Thomas' right to resume her job," he said.

The disciplinary committee found last month that Thomas violated the canons of professional ethics while prosecuting a fraud case in the Kingston and St Andrew  Parish Court in November 2017.

A complaint was made in 2019 by Lowell Spence, a National Commercial Bank branch manager who was freed of fraud charges in November 2017.

Spence complained to the GLC that Thomas knowingly used false evidence or participated in the creation or use of evidence she knew to be false.

The complaint stemmed from the prosecutor's attempt to refresh a witness' memory from a statement but defence lawyer Bert Samuels pointed out differences in the statement.

The DPP attended court and offered no further evidence in the case.

Wildman has argued that the case should not have been halted and doing so was a "travesty of justice".

"Instead of going to Half-Way Tree and supporting her prosecutor, Ms Llewellyn chose to throw her prosecutor under the proverbial 'bus'," he added.

Wildman is insisting his client did not commit an offence, declaring that Thomas will be vindicated when the matter goes before the Court of Appeal.

Thomas is the first prosecutor in Jamaica's legal history to be found guilty of professional misconduct.

A date is to be set to give Thomas an opportunity to be heard before a sanction is imposed by the disciplinary committee.