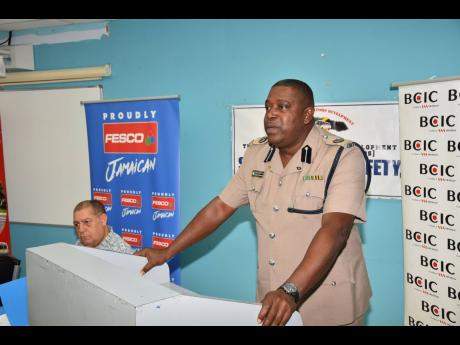 The Jamaica Constabulary Force (JCF) is encouraging motorists to begin making early adjustments to the requirements under the new Regulations of the Road Traffic Act 2018.

Head of the Public Safety and Traffic Enforcement Branch (PSTEB) of the JCF, Assistant Commissioner of Police (ACP) Gary McKenzie, said this would assist motorists to be adequately prepared for the new measures that will be in place once the regulations come into effect.

Speaking at the recent presentation ceremony for the Blue Ribbon Transport Operators First Responders Training Programme, at the University of Technology, Jamaica, the PSTEB head highlighted some areas that drivers should take note of, especially those operating public passenger vehicles (PPVs).

He warned that under the regulations, the use of cellular phone handsets will be prohibited while driving.

ACP McKenzie said that the use of a handset while driving is a distraction, and is encouraging owners of PPVs to make the necessary changes to facilitate hands-free telephone usage in their vehicles.

“Let us start to do that, so that once we start to impose the new regulations, people will not say that they didn’t know that they could not drive and use cell phones,” he added.

Another change that ACP McKenzie pointed out is that motor vehicle owners are going to be held responsible for infractions, especially when the electronic enforcement apparatus starts to work.

“Start to speak to your drivers, because you will find that as owners, you are going to feel the brunt of it,” McKenzie emphasised.

The PSTEB head also highlighted an area which he said has been a sore point over the years, that is, motor vehicle seizures, adding that the JCF has tried to work with members of the transport sector to ensure conformity.

He pointed out that under the current Road Traffic Act, vehicles are not being seized for insurance. “However, that will not be the case under the new regulations, because insurance is a very important thing.”

McKenzie cited the example of a pedestrian being carelessly hit down and maimed for life by an uninsured vehicle, resulting in the victim having to fend for himself or herself, under circumstances which would have been no fault of theirs.

“So, I am very happy that the authorities have seen it fit to remove those vehicles [from the roadways] and it is very important that we take these things into consideration as we go forward,” the PSTEB head noted.