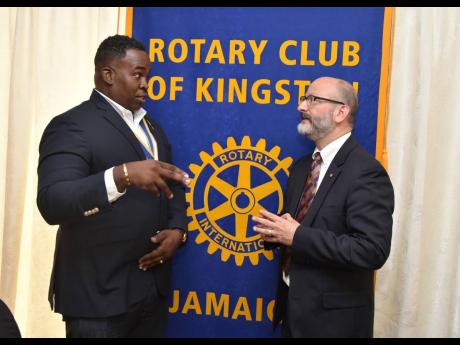 Kenyon Hemans/Photographer
Karsten Johnson (left), president of the Rotary Club of Kingston, is animated as he makes a point to Ian Stein, PAHO/WHO representative to Jamaica, Bermuda, and The Cayman Islands, during a luncheon held at Altamont Court Hotel in New Kingston on Thursday.

Speaking with The Gleaner on Thursday, Stein said that Jamaica had made “tremendous leaps forward”, noting initiatives undertaken by the Government and a range of organisations to deal with the illness.

Up to yesterday, the island had detected four cases of the virus.

“Unless we have strong surveillance, which we do have here in Jamaica, it’s difficult to know what’s happening around you,” he said, noting that it is also important that the medical staff at the different levels of care report how things are unfolding in communities.

Stein noted that, with the assistance of PAHO, the capacity of the National Public Health Laboratory to detect monkeypox was boosted, adding that Jamaica also now helps other countries with testing.

While he believes the island is prepared for monkeypox, he said Jamaica should still also be alert to the situation.

“So in the context of ‘Are we better?’ ‘Are we in a good situation to confront monkeypox?’, I think the answer is yes, but we can’t be complacent. We’ve had to learn some lessons from similar circumstances and I think, some of the circumstances, sometimes we underestimate where things are at and we don’t take action when they’re circulating in communities,” he said.

Stein was speaking with The Gleaner on the sidelines of a meeting of the Rotary Club of Kingston at the Altamont Court Hotel in New Kingston on Thursday, where he urged Rotarians to spread awareness of the dangers of polio and non-communicable diseases.

“Things are not all good right now in the world of vaccinations and in the world of polio recognition. We’re so close to completing this effort, we’re in a very precarious situation. This is a time for us to step up and to ask what we can do in our individual communities,” he added.

Stein said that awareness was important as there are rare instances in which polio could be spread through people who had been vaccinated.

He added that while Jamaica has a long history of high vaccination coverage, those rates have been decreasing in recent years because of misinformation scaring some parents.

“It’s not just an issue with COVID. It’s an issue that has been happening over the past several years, where we’re starting to see coverage go down on things that were well established in families. We’re seeing parents being informed about vaccine safety and the importance of vaccines from sources of information that I would not only say are unreliable, but are untruthful and dangerous,” he said.

Stein said he was willing to work with Rotarians and PAHO “to say, ‘How do we reinvigorate this historical commitment that we have to vaccination generally, but, in particular, how do we close off and ensure that what we’re actually trying to achieve globally on polio can also be maintained here as well?’”

He also noted that the work would not end with the Rotary Club, as there was a need to influence policy-making decisions.