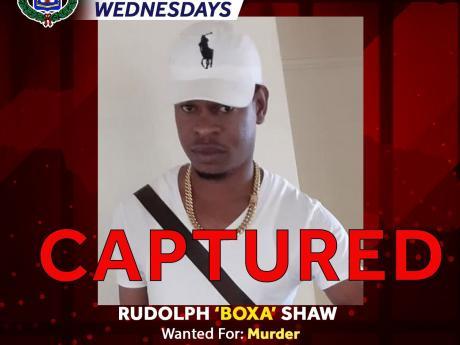 Shaw was captured in the Cayman Islands on July 8 and later deported to Jamaica.

Rudolph 'Boxer' Shaw, once St Catherine's most wanted man who is now facing two murder charges, was remanded when he appeared in the St Catherine Parish Court on Friday.

He is accused of murdering 59-year-old Wilfred 'Straight' O'Connor and Clinton 'Onie' Davis, 60, both of St John's Road addresses in St Catherine.

Parish Court Judge Nicole Kellier later ruled that Shaw should remain in custody until his next appearance before the Corporate Area Gun Court on September 7.

Kellier told the defence that the nature of the offences required that a bail application be made in the Gun Court.

Shaw's attorney, Queen's Counsel Peter Champagnie, conceded that he would find it difficult to convince the court to consider bail at this time.

He said there was very little prospect of success if an application was made based on the circumstances of the case.

It's alleged that Shaw shot and killed O'Connor on September 29, 2021. Davis reportedly witnessed the incident.

Shaw allegedly murdered Davis along St John's Road in May 2022.

He was captured in the Cayman Islands on July 8 and later deported to Jamaica.

The police say Shaw was previously pursued in Jamaica by the Joint Anti-Gang Task Force and other police units but managed to elude capture before leaving the island by boat.

Investigators say Shaw was wanted in connection with multiple murders and several shootings in St Catherine.

EDITOR'S NOTE: A previous version of this story indicated that a bail application was made. That is not so. The accused man's lawyer told the court that he did not believe he could have successfully argued for bail at this time. We regret the error.