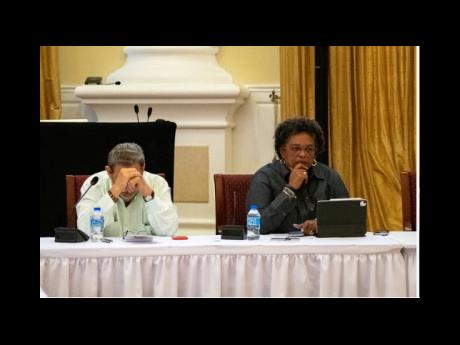 (CMC) – CARICOM leaders Saturday held a special meeting on the situation in Haiti where crime and political instability are seriously affecting the socio-economic development of the French-speaking CARICOM member country.

St. Vincent and the Grenadines Prime Minister Dr Ralph Gonsalves told the Caribbean Media Corporation (CMC) that the meeting provided the regional leaders the opportunity to discuss and update the Haitian Prime Minister Dr. Ariel Henry on the decisions taken during the CARICOM summit in Suriname last month.

The meeting was held amid the ongoing second regional Agri-Investment and Forum Expo11.

Gonsalves said that the while a decision has been taken for a CARICOM-led technical mission to visit Port au Prince for talks with all the stakeholders there, not date as yet been finalised even as Prime Minister Henry has reiterated that he “wants CARICOM to be very much involved”.

Gonsalves said plans are also being formulated for a meeting to be held in The Bahamas that would follow the technical mission's visit.

The meeting in Nassau is expected to be attended by the stakeholders from Haiti, the African Union, Francophone countries, as well as the Community for Latin American and Caribbean States and the Organization of American States others, Gonsalves added.

Regional leaders in July “welcomed developments” in Haiti which they said “heralded the possibility of a dialogue process taking place to resolve the protracted multidimensional crisis”.

The leaders had also urged that this process should be pursued to ensure a Haitian-owned resolution and encouraged all stakeholders to participate and welcomed the possible acceptance of international observers including CARICOM to accompany the dialogue process.

Gonsalves said CARICOM countries “will have to do a lot of advocacy” with a number of stakeholders including the United States as it pertains to security situation in Haiti, while the region would press ahead “to see how we could provide political assistance” to the French-speaking member country.

“It is a work in progress contained by our capabilities,” he added.

Gonsalves said that the meeting here on Saturday attended by the members of the CARICOM Bureau as well as Grenada's Prime Minister Dickon Mitchell and his St. Lucian counterpart Prime Minister Phillip J Pierre with the emphasis “on trying to build a consensus”.

In their communique following the July summit, the regional leaders had expressed “grave concern at the deteriorating security situation: in the country.

On Friday, the United Nations Central Emergency Response Fund announced that it is providing five million US dollars to Haiti as the country responds to humanitarian needs triggered by gang violence.

The assistance comes amidst the killing of hundreds of people since July in clashes between gangs in Haiti's Cité Soleil, said the UN humanitarian agency spokesperson, Jens Laerke.

The UN has said that between eighth and 17th July, over 471 people were killed, injured or unaccounted for. It said serious incidents of sexual violence against women and girls, as well as the gang recruitment of boys have also been reported.

Around 3,000 people have fled their homes, including hundreds of unaccompanied children, while at least 140 houses have been destroyed or burnt down.

A high level of insecurity is compromising humanitarian access to affected people, as well as to basic services such as health and education for between one million to 1.5 million people trapped in gang-controlled neighbourhoods.