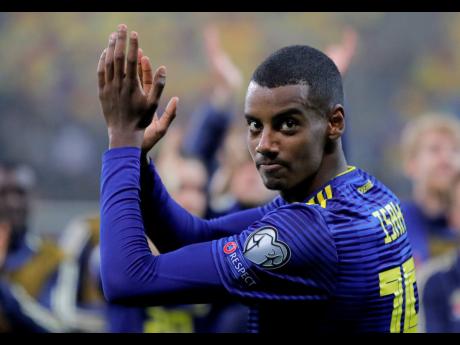 AP
Sweden’s Alexander Isak celebrates after the Euro 2020 Group F qualifying match between Romania and Sweden at the National Arena stadium in Bucharest, Romania on November 15, 2019.

Newcastle made their most eye-catching move in the transfer market since coming under Saudi ownership, setting a club record to sign Sweden striker Alexander Isak from Real Sociedad for a reported 70 million euros (US$70 million) yesterday.

It takes the spending of the richest club owners in world football to more than US$130 million in the summer transfer window, though Newcastle are still not targeting the game’s top players despite their wealth.

The 22-year-old Isak burst into global consciousness through some impressive displays for Sweden at the European Championship last year. He is widely regarded as a potential star of the future thanks to his pace and dribbling ability but has a modest scoring record, having netted 44 goals in 132 appearances for Sociedad and nine in 37 for Sweden.

Isak joined Borussia Dortmund at the age of 17 and was sold two years later in 2019 after failing to break into the team.

“He is an outstanding talent who is capable of making a big contribution to the team,” Newcastle manager Eddie Howe said.

“He is technically very good, with a mix of attributes that will complement us, but he is also at a great age to grow with this club.”

Joelinton was Newcastle’s previous record signing after joining for 35 million pounds (then US$44 million) in 2019.

That was two years before the buyout by Saudi Arabia’s sovereign wealth fund that has moved the club from northeast England into a different realm.

Isak will compete with Callum Wilson and Chris Wood for a place up front. Wilson is facing time out of the team after getting hurt in the 3-3 draw against Manchester City on Sunday.

“I’m delighted to have it done,” Isak said of his move. “It was a big, big decision for me but it is a decision I am really happy with.”

He added: “You always want to go into a team and know how they play. I think Newcastle play very attractive football and I want to be a part of that.”