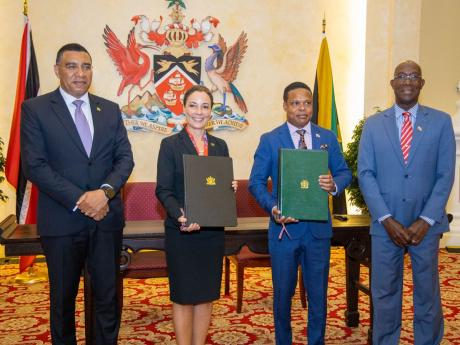 PORT OF SPAIN, Trinidad, CMC – The Trinidad and Tobago Manufacturers' Association (TTMA) on Tuesday welcomed the signing of the Memorandum of Understanding (MOU) on trade complaints between Trinidad and Tobago and Jamaica, describing the accord as a “landmark that will deepen and strengthen the existing trade relations between these two states”.

Foreign Affairs Minister Dr Amery Browne and his Jamaican counterpart, Kamina Johnson Smith, on Monday signed the MOU establishing a trade complaints mechanism that will create an avenue “for the expeditious resolution of trade complaints”.

The Ministry of Trade on Monday said that trade between the two CARICOM countries exceeded one billion dollars (One TT dollar=US$0.16 cents) annually and each has significant investments in the other.

It said the trade complaints mechanism's primary objective is to provide predictable and transparent procedures and channels of communication for resolving complaints, allowing exporters a fixed point of contact for their complaints, which will be resolved within 48 days from receipt..

In a statement, the TTMA said in recent times, both countries faced many trade- related challenges, especially those originating in the extra regional arena, which has curtailed the free flow of trade.

“In this regard solidifying CARICOM domestic relations, as this MOU seeks to do, is therefore seen as timely. TTMA looks forward to this MOU in establishing the Trade Complaints Mechanism that seeks to provide transparent communications in addressing concerns.

“The MOU resonates with TTMA's lobbying efforts over years where for example the Association had established a 'Tradedesk' that sought to resolve issues between the two CARICOM countries and hosted trade missions to Jamaica. Reciprocally, Jamaica has partnered in the TTMA's hosted Trade and Investment Convention, attending the trade show, showcasing their goods and services to willing buyers and participants from Trinidad and Tobago and the wider world,” the statement added.

The statement noted that Trinidad and Tobago and Jamaica are identified as each other's major trading partner within CARICOM and “efforts must be engaged to ensure the trading opportunities for both countries, are not only sustained, but nourished and continue to grow."

“It will assist in the removal of non-trade barriers and restrictions and continue the development of each country's economy,” the TTMA said, noting that its commitment is underscored by the proposal to undertake a trade mission to Jamaica where a high level delegation is expected to take part in the process.

“Set for the period November 20th to 25th, the objectives of the mission include, inter alia, building upon the commitments of both Governments to improve bilateral relations, seeking raw material suppliers from Jamaica, enhancing trading relations and opportunities for the private sector from both counties and other trade- related objectives,” the TTMA added.