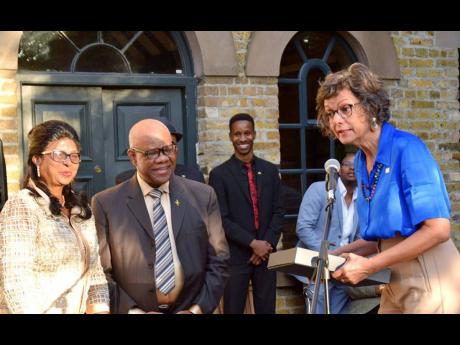 Contributed
Belize High Commissioner to the UK, Therese Rath (right) makes a presentation to the Ramocans. 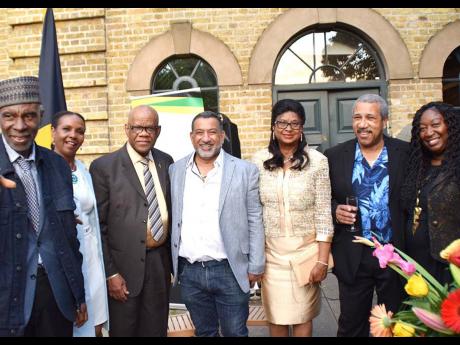 Seth George Ramocan, Jamaica’s high commissioner (HC) to the United Kingdom (UK) since January 2017, has bid farewell to the UK Jamaican community after his term of duty ended last month.

The outgoing high commissioner and his wife, Dr Lola Ramocan, were fêted by staff of the High Commission at a special evening reception at the picturesque Pump Gallery in Battersea Park, south London, on Wednesday, August 24, which was attended by diplomats and members of the diaspora community.

During his four-year term, which was extended by one year because of the pandemic, Ramocan not only served as high commissioner to the UK, but also as ambassador to six other European countries: Ireland, Finland, Cyprus, Denmark, Norway and Sweden.

He was part of the Jamaican delegation in London which won re-election to the International Maritime Organization Council’s Category C for the period 2020-21.

He was also among leading advocates calling for improvements to the Windrush Compensation Scheme for the damage suffered by victims who were not able to demonstrate their lawful immigration status following the 2017 Home Office Windrush scandal.

As high commissioner, he has helped to coordinate celebrations for Jamaica’s 55th and 60th independence anniversaries in the UK, which he regarded as opportunities for engaging the second, third and fourth generations of UK Jamaicans. He regarded this as an important role, as he said “... they are the imminent successors to carry Jamaica’s name forward and continue the legacy built by others before them”.

At the farewell reception, various tributes were paid to the couple for their tireless work in engaging the UK Jamaican community and for HC Ramocan’s leadership within the diplomatic circle of which he served, on occasions, as dean of the CARICOM Diplomatic Corps comprising high commissioners and ambassadors.

The couple, who will be celebrating 50 years of marriage later this year, was presented with gifts from various associations and groups. A special presentation was made by Belize High Commissioner Therese Rath, who said HC Ramocan’s “leadership and wisdom that he shared with my other Caribbean diplomatic colleagues will be truly missed”.