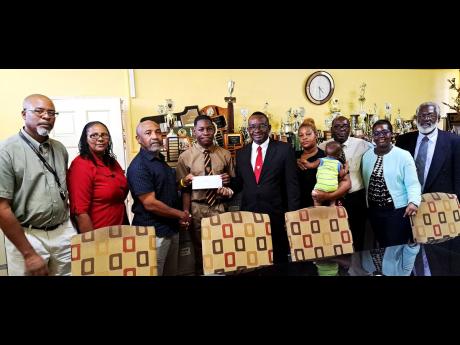 A scholarship in the name of a much-revered teacher of mathematics at Cornwall College, in Montego Bay, the late Bevill St. Elmo De Bruin was launched by the school’s old boys’ association (CCOBA) on Monday as part of efforts to honour the memory of the former educator.

De Bruin, who was affectionately known as Mister Dibbs, joined the academic staff at Cornwall College in 1968 and taught there for 35 years, during which he enjoyed overwhelming success with his students. He died in 2003 at the age of 79.

Alex Shaw, a fifth-form student at Cornwall College, became the first recipient of the Bevill De Bruin scholarship in recognition of his exceptional performance in mathematics in the 2020-2021 academic year.

Shaw, who is from the Cambridge community in southern St James, was awarded US$1,000 ($145,000) for scoring an average of 95 per cent, which placed him above his peers at the school.

“We wanted to honour the gentleman [Mister Dibbs] for quite a while, and we figured what better way to honour him than to offer a scholarship in his name,” said Barrington Harvey, president of the New York chapter of the CCOBA.

Harvey said the commencement of the new 2022-2023 school year provided the perfect platform for the CCOBA to launch the Bevill De Bruin scholarship, which took place in the school’s conference room.

“We donated a scholarship in the name of Bevill De Bruin, a former deputy headmaster and a mathematics genius. Mr De Bruin was revered by us. This man left Ceylon, now Sri Lanka, to Jamaica and never looked back,” said Harvey, in highlighting the former educator’s unwavering commitment to Cornwall College.

“He dedicated his life to Cornwall College until he died, I am telling you that’s not easy. We didn’t know of him having any family, he gave his life to an institution,” said Harvey.

In 1999, the Jamaican Government honoured De Bruin with the Order of Distinction for his outstanding contribution in the field of education, which included but was not limited to transforming the lives of thousands of boys whose lives changed forever through the guidance he provided them.

He further noted that De Bruin was disciplinarian, whose influence rubbed of on teachers and students alike. In addition to being a gifted teacher of mathematics, he also coached the cricket, athletics, table tennis and the rifle-shooting teams at the school.

Reacting to being selected as the first recipient of the Bevill St Elmo De Bruin Scholarship, Shaw said:

“I am both surprised and grateful at the same time. When I heard that I was getting this scholarship it was so shocking,” said Shaw, who has set his sights on becoming an orthopaedic surgeon, who specialises in the muscular-skeletal system of the human body – the bones, joints, ligaments, tendons, and muscle.