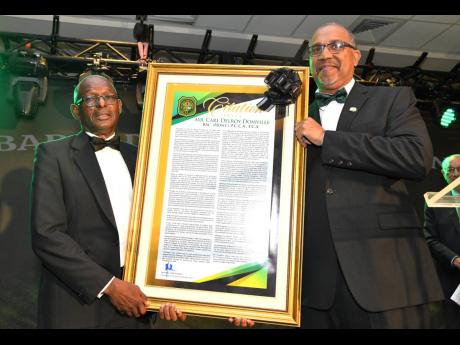 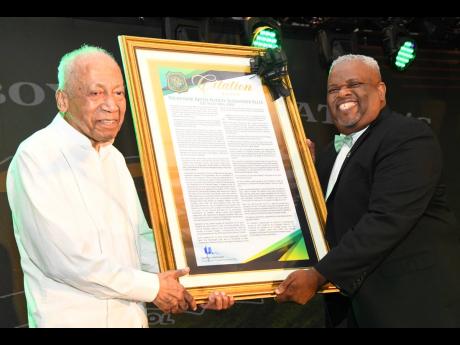 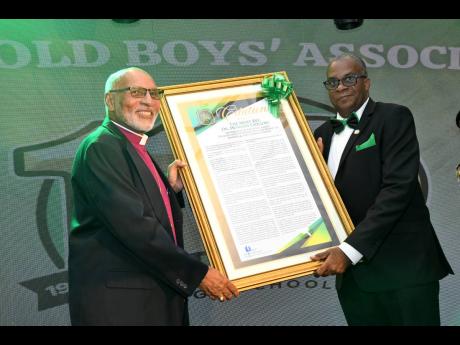 Rudolph Brown/Photographer
The Most Rev Dr Howard Gregory (left), Bishop of Jamaica and the Cayman Islands, receives a citation from Michael Roofe at COBA’s anniversary gala on Saturday.
1
2
3

Three distinguished alumni were among nine honourees feted by the Calabar Old Boys’ Association (COBA) at Saturday’s Annual Dinner and Awards as the all-boys’ high school celebrates 110 years of existence.

Gregory, who was the guest speaker, was honoured for being a “fearless defender of the marginalised and dispossessed” while COBA praised Ellis’ record as a distinguished scholar of Latin American and Caribbean literature.

Ellis was described as a “fundraiser par excellence” and “inimitable trailblazer” who fulfilled the standards of the Ernest Price Award for Excellence given by COBA.

Domville, a chartered accountant and director of Radio Jamaica Limited, was lauded as a fierce nationalist who remained devoted to his alma mater.

“This true Jamaican patriot was invited to take his place among the noble pantheons who have brought unalloyed honour to Calabar High School,” COBA said of Domville.

Manufacturer Wisynco was also recognised for its funding of the Vin Lawrence Gymnasium, which has evolved into a health and wellness centre for student athletes and teachers.

Patterson was recognised for work that was “unprecedented” and “well documented” in Jamaica and the Caribbean and for his philantrophy to the school, teachers, and students.

In his address, Gregory, who is also Anglican Bishop of Jamaica, emphasised that schooling should not only be focused on producing literate, numerate, and tech-savvy critical thinkers but on producing rounded citizens.