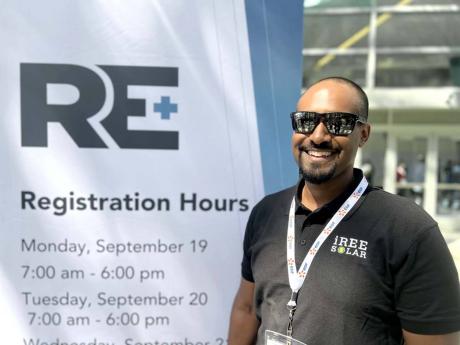 As Jamaica strives to increase its usage of renewable energy, wins are being celebrated but challenges abound. Jamaica Renewable Energy Association President Alex Hill said his organisation is seeing an increased demand for solar and renewable...

As Jamaica strives to increase its usage of renewable energy, wins are being celebrated but challenges abound.

“A lot more individuals and businesses are seriously considering and investing in going green. They are investing in multiple types of technologies, predominantly solar, to either make themselves fully independent energywise or offset some amount of their energy [costs],” he told The Gleaner in an interview ahead of the 2022 staging of RE+ in Anaheim, California.

The US Embassy Kingston is supporting a Jamaican delegation attending the largest renewable energy event in North America, which is being staged from September 19 to 22.

Hill explained that the increased take-up is likely being spurred by the fact that energy costs are at “historical highs”.

After 16 months of lobbying, the association saw a big win earlier this year with the removal of the 20 per cent general consumption tax on batteries used in the sector.

He told The Gleaner that the regulations governing the sector were also out of touch with current reality and need to be updated.

“We were quite shocked to see that the Government is putting forth new regulations for net billing without any comments or consideration from the stakeholders in the Renewable Energy Association. That’s the energy future of Jamaica, and we have not been consulted, and it is, in our opinion, unfairly skewed towards JPS’s interest,” he said, referencing the Jamaica Public Service Company, the island’s sole distributor of electricity.

“There are now fines that have been put forward that we do not agree with, and there are many other issues that we look forward to discussing with the energy minister and his team in the very near future,” Hill said.

Jamaica has set targets of achieving 33 per cent of electricity generation from renewables by 2030 and 50 per cent by 2037.

In March 2021, Minister of Science, Energy and Technology Daryl Vaz said that by 2025, Jamaica would be generating approximately 22 per cent of electricity from renewable sources.

Hill argued that the goal in and of itself is a positive one but that more focus needs to be placed on how it will be achieved.

He said that Jamaica has a tendency to favour large, megawatt-scale projects that go to one or two companies, which are normally foreign countries, to achieve renewable-energy targets.

The association would like to promote and expand the use of distributed generation – systems in homes and small and medium-size businesses.

“There is where we find the bottlenecks because that goes back to regulations and why the implementation of these systems is being held back because of an inefficient and ineffective inter-connection programme. The same methodology that is used to connect a megawatt-scale plant is used to connect an extremely small plant at your house. That is illogical and ineffective. It is something that we have been speaking about and will continue to speak about because every Jamaican citizen should have access to installing a renewable-energy system and participating with sharing that energy on the grid at a fair price,” he said.

The association wants transparent review of the existing net-billing programme, which has caps on residential and commercial installations of 10kW and 100kW, respectively.

Hill said that a revision of those caps is critical, especially with the oncoming wave of electric vehicles.

“If you have an electric vehicle or two at your house, a 10-kilowatt system isn’t gonna really do much for you to charge your home and your cars. There are many businesses in Jamaica that want to install solar much larger than 100 kilowatts but have no means of sharing the excess energy generated on a weekend or on a low-production day because by current law, if you install a system over 100 kilowatts in AC capacity, you have to install a blocking device to ensure that no energy goes back to the grid,” he explained.

Hill said that that redounds to waste for 52 days of the year as on Sundays, energy is being generated and is not being put to use.

Further, he reasoned that the current net-billing credit is low and is also in need of revision.

Hill shared that energy from net billing or solar is the cheapest source of energy that the JPS offers.

“It’s clean, and if you have a lot of that coming into your grid, you can generate more energy and distribute it around the grid as you need. We argue that it is also better for the grid because you can have more energy coming to the grid, which could help to stabilise it,” said Hill, who is also CEO of IREE Solar.

“Make it easier and incentivise people to generate their own energy. We can’t rely on one way of generating energy. The next generation requires better from us,” he remarked.