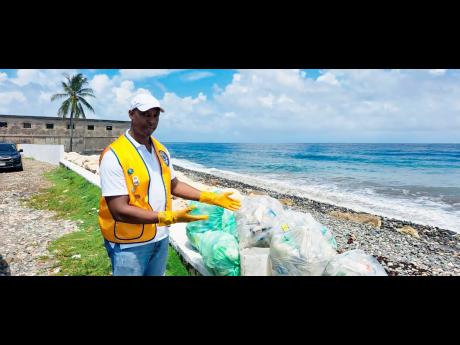 Photo by Gareth Davis
Warren Francis of the Lions Club in Port Antonio shows some of the waste collected by Optimist Club members in Buff Bay, Portland, on Saturday.

The Optimist Club of West Portland, along with the local arm of Lions International, conducted a major clean-up of the Blue Berry beach in Buff Bay recently to rid the area of plastic bottles, Styrofoam boxes, single-use plastic bags, and other refuse. The organisers say most of the garbage had washed into the sea from rivers and drains as a result of illegal dumping by residents.

The clean-up exercise on Saturday which has been recognised as International Coastal Clean-up Day also attracted other volunteers, and was deemed a success with at least 30 bags of waste removed from the beach.

The effort saw both groups engaged in separate exercises, with the Optimist Club tackling the western end of the beach, while Lions International’s focused was on the eastern end.

Warren Francis, a member of the Lions Club of Port Antonio, outlined the range of the group’s activities.

“We are undertaking the clean-up of three beaches today, Blue Berry beach in Buff Bay, the beach at the College of Agriculture, Science and Education (CASE) at Passley Gardens, and the White River Beach at Norwich, near Port Antonio.”

He said the teams also partnered with the business community in Port Antonio and Buff Bay, and special assistance was provided by sponsors George’s Supermarket, Buff Bay, Texaco, DIB Hardware, G&B Jerk, and the Chinese supermarkets, which supplied the necessary resources.

Following the undertaking, Francis urged residents to dispose of their garbage in receptacles instead of dumping them along the roadway and gullies. He emphasised that this creates a serious health hazard and causes damage to the environment.

One of the volunteers, Gabrielle Ellis of The Beauties of Portland, said that the group recognised the related and long-term dangers of pollution and were happy to join in the efforts.

“We believe that cleaning is important and we were eager to come out here. There is a future generation to come and they will want to live in a clean environment, and therefore it is important to keep our environment clean,” she said.