Sign Up Jamaica breaking down barriers for the deaf 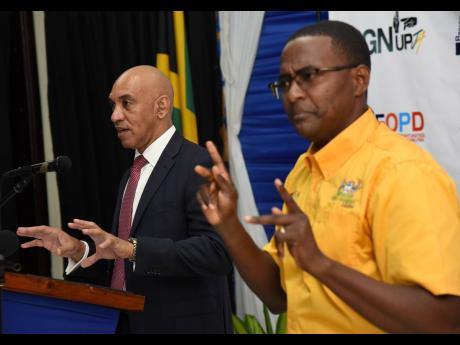 One hundred Jamaicans from across the public and private sectors and civil society are now better equipped to serve members of the deaf community after participating in the Sign Up Jamaica programme.

The programme, which was organised by RISE Life Management in partnership with the European Union, taught participants how to communicate using sign language.

RISE Life Management Programme Manager Shawn McGregor told The Gleaner that the Sign Up initiative is aimed at improving social and economic inclusion for the deaf community.

“That was at the heart of the design of this project, and that’s why we have targeted the public sector. The deaf community can have issues accessing statutory services like going to the tax office and not being able to communicate with the staff there, or going to the police station is a life and death issue to report crimes, and so on,” he said.

Amanda Anderson, who spoke during Thursday’s graduation ceremony through an interpreter, detailed some of the challenges she has experienced using police stations as a deaf person.

Six police officers were a part of the graduating cohort, and Commissioner of Police Major General Antony Anderson said that he is looking for this number to grow over time.

“We have to get more of our members involved in this kind of training in our thrust to provide better service,” he said.

Jamaica’s 2001 census showed that 2.7 per cent of the population had a hearing disability.

Dione Jennings, chief technical director in the Ministry of Labour and Social Security, said that strides are being made to improve access for persons with disabilities by implementing regulations to support the Disabilities Act 2014. The act came into effect in February this year.

She said the Jamaica Council for Persons with Disabilities will provide guidelines on a code of practice for healthcare and health facilities, education, and training.

“Once the board has approved this, we can advance this for tabling in the Parliament,” she said, while urging more private sector entities to get involved in promoting inclusion.