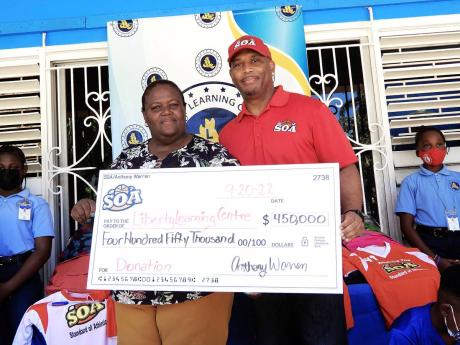 Carl Gilchrist
Rosemarie Brent-Harris, principal of Liberty Learning Centre, accepts a cheque from Anthony Warren (right), CEO of Standard of Athletics, on Tuesday to assist with the building of a multipurpose court at the St Mary school.

THE LIBERTY Learning Centre in Tower Isle, St Mary, received a boost to its sports programme on Tuesday when the Texas-based Standard Of Athletics (SOA) Association donated to the school a cheque for $450,000, along with sporting outfits and backpacks.

Anthony Warren, SOA’s CEO, told The Gleaner that a similar presentation will be made today to the Runaway Bay Primary School in St Ann, while the Ocho Rios Primary School also benefited.

Warren, an American, explained that the donations were made through the SOA-affiliate organisation, Shaping and Preparing Youth. He said his philanthropic endeavours in Jamaica began in 2015, after visiting on vacation and falling in love with the island.

“I’ve been all over the world but I like Jamaica the best, so I’ve been doing since 2015. This is my first time doing this school,” he said.

“Sports has always been my first love. I was a poor kid growing up and sports was my way out,” Warren said, explaining that he got a full scholarship to play American football. After football, he spent 15 years in banking then went on his own to start Standards of Athletics, a non-profit organisation.

Liberty’s principal Rosemarie Brent-Harris was grateful for the help, pointing out that it was Warren who actually approached the school and offered to help.

“This is not something that we’re generally used to, people just walk in and decide that I see something that I can be of assistance with and that was really heart-warming for us because we have many needs,” the principal said in highlighting Warren’s extraordinary effort to render assistance.

“The area that he spotted first was a play area. So, we have an old tennis court at the back and we’ve been wanting to refurbish this tennis court for years but because we have so many other needs, particularly for classroom space and so on, we put those first,” she explained.

Work has already started to upgrade the old tennis court into a multipurpose facility, which should be completed next year.

Liberty Learning Centre has 360 students enrolled and 33 teachers on staff.