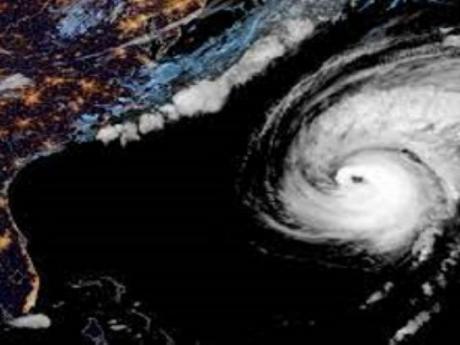 However, the government's early assessment is that the island has come through the powerful storm in good shape.

Fiona, which had earlier left a trail of death and destruction in its wake in the northern Caribbean, approached Bermuda as a dangerous Category 4 storm packing sustained winds of 130 miles per hour (mph).

Although Fiona's closest point of approach was around 130 miles to the west of Bermuda around 5.00 am (local time), a top wind of 113 mph was recorded on the island.

The Bermuda Electric Light, the sole electricity provider there, said that an estimated 27,000 homes, about three-quarters of its customer base, lost power during the storm.

Rain is expected to continue through the morning and into the afternoon before easing.

A hurricane watch has been lifted, but a tropical storm warning was expected to remain in force for several more hours as strong winds continued to rake the British Overseas Territory, officials said.

The government advised the public to stay away from the coasts and out of the water. The expectation is for dangerous seas and swells to diminish over the coming days.

National Security Minister Michael Weeks said early on Friday it appeared that the island had come through the storm relatively unscathed, but the full extent of any damage would not be determined until emergency crews could get out.

“I am asking the public to stay off the roads as long as possible so that our emergency crews can be out on the roads,” he said, adding that the worst was gone but the island was still in the throes of tropical-storm winds.

Lyndon Raynor, of the Emergency Measures Organisation, said there had been four medical calls during the storm, with two people needing to go to hospital, but the extent of their injuries was not immediately known.

Government schools were closed on Friday with classes resuming on Monday.