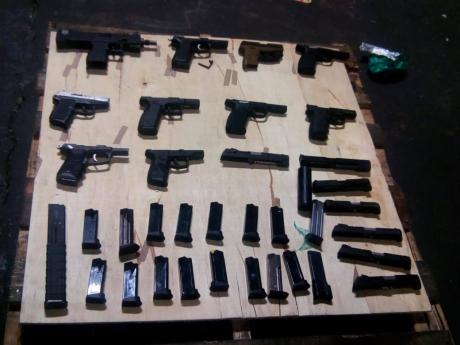 Contributed
A cache of illegal guns seized at the port recently

PRIME MINISTER Andrew Holness has called for an international “war on guns” to end the influx of illegal weapons and epidemic of murders in Jamaica.

“In the same way that a war on drugs is being prosecuted, in which we have been faithful partners in policing what comes through our waters or leaves our shores, there now needs to be a war on guns.” Holness pleaded as he addressed the 77th session of the General Assembly of the United Nations in New York on Thursday.

The Jamaican leader urged for pressure to be placed on international gun manufacturers to institute stronger measures to prevent the illegal flow of weapons into the hands of poor, marginalised youth in developing countries like Jamaica.

“The propensity to resolve conflict or cope with social and mental stresses through violence requires a public health response and Jamaica has not only engaged in global initiatives such as the Partnership to End Violence Against Children, but has also empanelled a National Commission on the Prevention of Violence to advise the Government on building out an articulated public health and social services response,” the prime minister told the gathering of world leaders.

He said that the situation is being compounded by the influx of illegal and unregistered small arms into the island.

“From organised transnational criminal enterprises to street-level gangs, to the misguided youth in the inner city, the availability of guns is driving an ever-increasing homicide rate,” Holness said, pointing out that Jamaica does not manufacture guns, but its population is suffering immensely from the illegal guns trade.

There was, however, mixed reaction to Holness’ move to rally world leaders to support a “war on guns’’ by members of the diaspora in the US.

New York police inspector, Jamaica-born Michael King, said that, while the call is the right approach, the Government must outline how such an initiative will work.

“Have you reached out to collaborate with other countries who are having similar problems? How will this be implemented? How do you plan on going about this? Saying it is great but it is the how that is the issue,” King said.

Dr Rupert Francis, head of the Diaspora Crime and Prevention Task Force, disagreed that the explosion of violence is being fuelled by a rise in mental health issues.

“It is a lack of will to do anything about the crime situation. Crime is paying. Corruption and scamming are rampant. We must address all these issues if we are to stem crime in Jamaica,” he said, adding that “the issue of guns coming into Jamaica has plagued the society for many years and there must be an intervention and prevention programme for young people to make guns less attractive to them”.

Dr Allan Cunningham, Global Jamaica Diaspora Council member for the US Southern Region, said the initiative is likely to get little or no support from the US, whose perspective on arms is totally different from Jamaica’s.

“Jamaica is trying to curb crime through the regulation of guns while the focus must be on plugging the loop-holes at our borders,” he said

Cunningham feels that the issue of illegal guns flow must be dealt with at the local level.