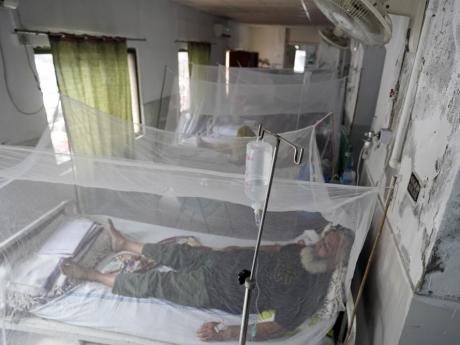 Pakistani patients suffering from dengue fever, a mosquito-borne disease, are treated in an isolation ward, at a hospital in Lahore, Pakistan, Friday, September 23, 2022. Pakistan has deployed thousands of additional doctors and paramedics in the country's worst flood-hit province to contain the spread of diseases that have killed over 300 people among the flood victims, officials said Friday. (AP Photo/K.M. Chaudary)

ISLAMABAD (AP) — Pakistan deployed thousands more doctors and medics to battle the outbreak of disease as the death toll from the unprecedented floods that have gripped the country this summer surpassed 1,600 on Friday, officials said.

The disaster management agency said 10 more people had died from the floods in the past 24 hours — four in Sindh, the worst-hit province in the deluge, and six in Baluchistan province — bringing the overall number of fatalities to 1,606 across Pakistan.

In Sindh, where thousands of makeshift medical camps for flood survivors have been set up, the National Disaster Management Authority said outbreaks of a spate of illnesses such as typhoid, malaria and dengue fever have killed at least 300 of the flood victims.

Some of the doctors who refused to work in Sindh province have been fired by the government, according to the provincial health department.

Floods have killed 728 people, including 313 children and 134 women in the province since July.

The monsoon rains and flooding, which many experts say are fuelled by climate change, have also affected 33 million people and destroyed or damaged two million homes across Pakistan. About half a million flood survivors are homeless, living in tents and makeshift structures.