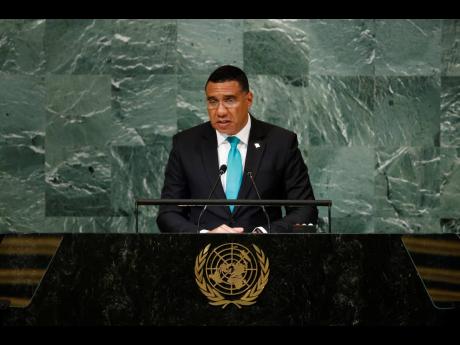 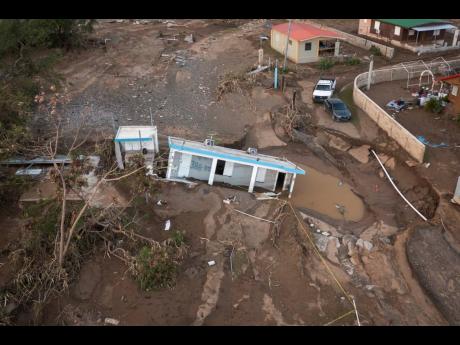 AP
A house lays in the mud after it was washed away by Hurricane Fiona at Villa Esperanza in Salinas, Puerto Rico, on Wednesday, September 21. Fiona left hundreds of people stranded across the island after smashing roads and bridges, with authorities still struggling to reach them four days after the storm smacked the U.S. territory, causing historic flooding. (AP Photo/Alejandro Granadillo)
1
2

PRIME MINISTER Andrew Holness has intensified calls for an urgent overhaul of the global financing architecture to create an enabling medium for small island developing states (SIDS) like Jamaica to survive the effects of climate change and grow their economies without incurring massive debts.

The prime minister, who was addressing the 77th session of the United Nations General Assembly in New York yesterday, said, “Climate change is an immediate existential threat for SIDS, like Jamaica, the Caribbean and the Pacific. Concerted action to slow down and halt global temperature rise, is literally a question of our survival.”

Further, Holness emphasised that even with the most prudent fiscal management and debt sustainability measures, SIDS like Jamaica are always mindful that a single climate event could wipe out 100 per cent of their economies in a few hours.

The prime minister noted that as the leaders were meeting the world was facing unprecedented, overlapping crises: destruction by storms, the ongoing impacts of the COVID-19 pandemic, the war in Ukraine, inflation, debt, energy and food insecurity, and natural disasters fuelled by climate change.

“While every country has been negatively impacted, we do not all have the same capacity to withstand shocks and recover. Indeed, recovery has been uneven, and there has been further widening of pre-existing development inequalities,” he pointed out.

Holness said that while Jamaica will continue to develop its own resilience and play its part in mitigating climate change, its actions alone cannot change the trajectory.

“We call on all countries to meet their commitments and contributions to climate targets. And we call on the developed world to increase their commitments and ambitions in climate financing, particularly for adaptation and for loss and damage. As an island, Jamaica is keenly attuned to the importance of protecting and sustainably using our ocean and marine resources,” he told the gathering of world leaders.

The prime minister said that SIDS and some middle-income countries have particular vulnerabilities to climate and external economic shocks, which have an impact many times greater than their national budgets, which have a crippling effect on infrastructure development.

“For SIDS to survive economic shocks and recover lost and damaged infrastructure they are forced to borrow, only to be confronted again in a few years with another round of natural disasters which could wipe out significant infrastructure and force us to add to our already high debt,” Holness stressed.

“We fully support the work of the high-level panel developing the Multi-Dimensional Vulnerability Index. We eagerly anticipate an era of truly equitable access to concessional financing and other funding support which will enable us to invest in the resilient infrastructure and create fiscal buffers so that we can withstand and recover quickly from the next economic, health or climate shock with little borrowing. Without the acknowledgement of vulnerability as a basis for access to finance, SIDS will continue to struggle and will be unable to achieve the SDGs,” the prime minister said.