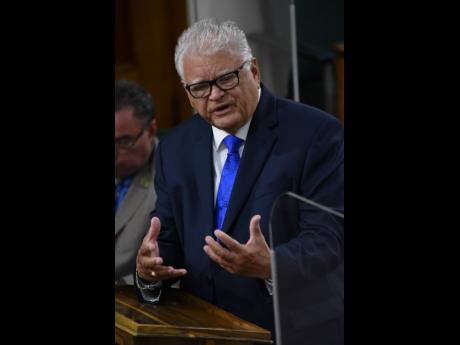 SENIOR CITIZENS have been given a reason to celebrate now that the revision of the National Policy for Senior Citizens is complete, their having waited patiently for years.

The launch of the revised National Policy for Senior Citizens coincided with the official ceremony organised to mark National Senior Citizens Week on Wednesday at the AC Hotel by Marriott in New Kingston.

Labour and Social Security Minister Karl Samuda said the finalisation of the revised policy is the result of a commitment he made in honour of his late predecessor, Shahine Robinson.

Now that the revision of the policy is complete, Samuda said his ministry is “working towards creating a responsive programme framework that will empower senior citizens to lead healthy, active and productive lives”.

“This comprehensive framework will prioritise all Jamaicans over 60 years of age, whether or not they choose to identify themselves as senior citizens. We will strengthen the capacity of the National Council for Senior Citizens for the effective and efficient implementation of the policy, and we will actively engage all our stakeholders to deliver, monitor and evaluate programmes and initiatives,” he added.

“The Ministry of Labour and Social Security continues to provide services to advance the well-being of older people. We are committed to the Government’s plan for healthy, active and productive ageing, embodied in our vision that senior citizens live and participate actively in a society that guarantees their rights, promotes their responsibilities, recognises their capabilities and contributions, and facilitates their enjoyment of a life of fulfilment, health and security,” the minister continued.

According to Samuda, priority will placed on supporting the elderly through the services of the National Council for Senior Citizens, the National Insurance Scheme (NIS), the Programme of Advancement through Health and Education (PATH), various public assistance interventions and the new Social Pension Programme.

“We are all stakeholders, as individuals, senior citizens, families, communities, businesses, government and non-government entities, policy and decision-makers at every level, including the Government,” he stresssed.

Senior citizens comprise approximately 12.6 per cent of Jamaica’s population, and this age cohort is the fastest-growing segment of the population.

Data from the Planning Institute of Jamaica in 2012 showed that about 32 per cent of all Jamaican households had a member who was 60-plus years old. The majority of the elderly fall in the 65-79 age group (54 per cent), while the 60-64 age group accounted for 26 per cent, and the 80-plus age group at 20 per cent.

The 2022 National Census, which is now being conducted, will provide updated information, but, in keeping with global trends, the Statistical Institute of Jamaica projects that Jamaica’s ageing population is expected to double by year 2050, when 22 per cent, or almost a quarter of the population, will be senior citizens.

The revised National Policy for Senior Citizens is now available on the website of the Ministry of Labour and Social Security.