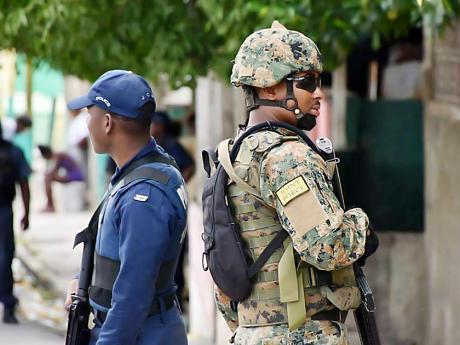 The initiative, which was launched on Friday, will give emphasis to the police divisions with the highest levels of violent crimes. - File photo.

The Jamaica Constabulary Force (JCF), in partnership with the Jamaica Defence Force (JDF), has launched a major initiative called 'Operation Relentless II', which targets gangs and gangsters involved in violent crimes and the illicit gun trade.

Focus is also being given to the associated lottery scamming and narcotics activities that fund these guns.

The initiative, which was launched on Friday, will give emphasis to the police divisions with the highest levels of violent crimes.

The JCF noted that among the major drivers of the recent violence in Jamaica are ongoing conflicts in the scamming underworld as well as internal conflicts within criminal organisations over illegal firearms and ill-gotten gains.

The operations come in anticipation of the new Firearms Act that is expected to bring tougher penalties for possession and use of illegal guns.

A series of joint activities with the JDF, as well as plans developed at the JCF High Command, Area and Divisional Command levels will be executed under Operation Relentless II.

“This operation features a suite of specific and planned tactical operations designed to target those gunmen, scammers and other criminals who have no regard for life and who have been behind the recent shootings and murders,” Anderson said.

“We have been gathering intelligence on persons who are funding these violent crimes through lottery scamming and drug trafficking activities with a view to prosecution. We will also be working with other local and overseas law enforcement partners to capture and extradite some of these persons,” he continued.

Additional manpower and mobility support are being allocated to the divisions.

“If you see unusual numbers of police and military carrying out activities in your communities, don't be alarmed. It is part of a series of intelligence and data-driven operations that will be carried out across several divisions throughout the rest of the year,” said Anderson.

Members of the public are being asked to be patient and cooperative as the security forces carry out the operations.

The public is also being asked to report any strange persons in their communities and to be on the lookout for wanted persons.