#TrackingIan | Centre to pass southwest of Jamaica on Sunday 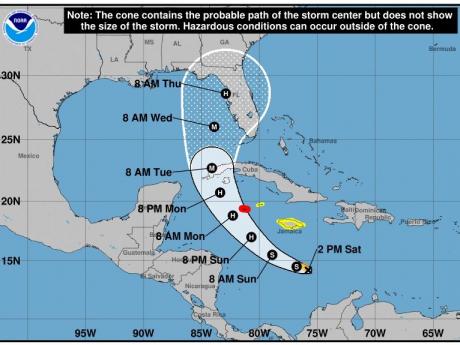 The storm could produce 2-4 inches of rainfall, mainly over eastern and southern parishes as it passes close to Jamaica on Saturday afternoon through to Sunday.

The centre of Tropical Storm Ian is forecast to pass southwest of Jamaica on Sunday.

The country remains under a tropical storm watch.

At 10 a.m. the centre of the storm was located near latitude 14.4 degrees North,  longitude 75.2 degrees West or about 270 miles south-southeast of Kingston or 405 251 miles south southeast of Morant Point.

Ian is moving towards the west-southwest 15 mph and this general motion is expected to continue through tonight.

A turn towards the northwest is forecast on Sunday, followed by a north-northwestward turn on Monday and a northward motion on Tuesday.

Significant strengthening is forecast during the next few days.

Ian is expected to become a hurricane late Sunday evening and could be at or near major hurricane strength late Monday when it approaches western Cuba.

Tropical-storm-force winds extend outward up to 60 miles from the centre.

On the forecast track, the centre of Ian is to move across the central Caribbean Sea today, pass southwest of Jamaica on Sunday, and pass near or over the Cayman Islands Sunday night and early Monday.

The storm could produce 2-4 inches of rainfall, mainly over eastern and southern parishes as it passes close to Jamaica on Saturday afternoon through to Sunday.

Flash flooding is likely over low-lying and flood-prone areas for the remainder of weekend and on Monday.