#TrackingIan | Residents of Commissary in Clarendon worried about flooding from storm 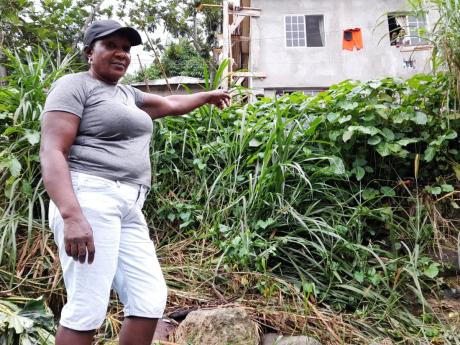 Juliet Green Clarke, a resident of Commissary in Frankfield, Clarendon, points to damage to her yard from a river. - Nathaniel Stewart photo.

Some residents of Commissary in Frankfield, Clarendon are now on edge as Tropical Storm Ian approaches Jamaica.

Camelia Bryan and Juliet Green Clarke say the house they share is prone to flooding during periods of heavy downpour, noting that the dwelling has been flooded on multiple occasions.

They say given their proximity to a river, there is little they can do to mitigate being impacted by the storm.

"I'm a bit nervous now, well nervous too. We know what we go through several times," Bryan shared.

Green Clarke said that with a gabion basket, which is a structure used to mitigate against erosion, being undermined when the river overflows, the situation is more unbearable for residents.

Commenting on preparations, Bryan said that the only thing her family can do is pack up their valuables including clothing, watch the river, and take action if it overflows.

Both Green Clarke and Bryan said that the situation has been affecting them for years with no solution.

"The last time when we flood out wi haffi put our furniture in the road," Green Clarke informed.

To solve the problem, Green Clarke said a new gabion basket needs to be erected.

The householders noted that they lose chickens and goats each time the river overflows its banks.