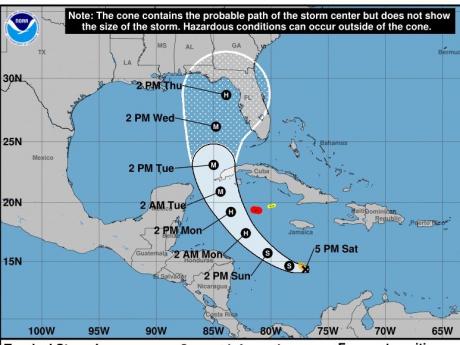 The Meteorological Service Division has discontinued the tropical storm watch for Jamaica.

The met office says over the past several hours, Tropical Storm Ian has drifted a bit to the south, taking it farther from the coastline and placing Jamaica outside of the projected range of tropical storm force winds.

But it says while the tropical storm remains over the west-central Caribbean, it will continue to produce a large area of showers and thunderstorms that could impact the weather over Jamaica through Monday.

Locally, heavy rainfall could produce flash floods mainly over low-lying and flood-prone areas of southern and eastern parishes and residents are urged to remain alert.

At 2 p.m. the centre of Tropical Storm Ian was located near latitude 14.2 degrees North, longitude 75.8 degrees West, or about 270 miles south-southeast of Kingston, or 251 miles south of Morant Point.

Ian is now moving towards the west near 16 mph and this general motion is expected to continue through tonight.

A turn toward the northwest is forecast on Sunday, followed by a north-northwestward
turn on Monday.

Maximum sustained winds remain near 45 mph with higher gusts, however, significant
strengthening is forecast during the next few days.

Ian is expected to become a hurricane late Sunday evening while southwest of Jamaica and moving farther away towards the Cayman Islands.

Jamaica is currently well outside of the range of tropical storm force winds, which extend outward up to 60 miles from the centre.

On its forecast track, the centre of the tropical storm is forecast to remain south of Jamaica and continue moving westward away from the island through Saturday night and Sunday morning.

Ian will then pass near or over the Cayman Islands on Sunday night and early Monday before approaching western Cuba on Monday.