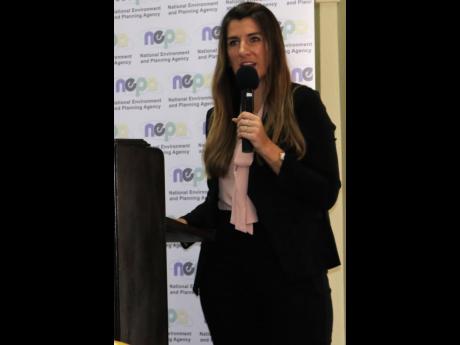 The Japan International Co-operation Agency (JICA) has taken on the mammoth task of helping Caribbean countries address the alarming state and rate of marine pollution in the region, most of which comes from land-based activities.

To this end, the JICA Jamaica office recently hosted the workshop ‘Marine Plastic Pollution in the Caribbean Region’ to share knowledge and experience on plastic and solid- waste management in the Caribbean, among representatives of Jamaica, Antigua and Barbuda, Grenada, Guyana, and St Lucia, with a view to enhancing the development cooperation framework within the region.

Plastic waste has emerged as a troubling issue for the environment, more so the marine environment, and Japan, having accumulated a wealth of knowledge on better solid- waste management, is now in a position to share its expertise with other countries, according to resident representative of the JICA Jamaica office, Mitsuyoshi Kawasaki.

In his opening remarks to the workshop at the Hotel Four Seasons in St Andrew, he said that countermeasures were urgently needed in developing countries.

Kawasaki explained: “In Japan, we have accumulated our own experiences for better solid-waste management, and now, we are in a better position to share our experiences with other countries and tackle together for improvement of solid waste disposal issue, especially the marine plastic waste minimisation.”

As the implementing arm of Japan’s Official Development Agency, JICA, through its offices in the Caribbean, will cooperate with regional states and bring together key players with the aim of assisting with data-driven solutions for marine plastic in the region.

This is the second such workshop it has hosted this year, the first having been held in St Lucia in March.

Kawasaki explained that JICA is already looking at how to tackle the marine plastic issue. Strategies include:

• Introducing alternative materials or reducing use

However, the task ahead for JICA is daunting, given the fact that the Caribbean has the second most plastic-contaminated sea in the world after the Mediterranean Sea and is the biggest plastic polluter per capita in the world, with between 70 and 85 per cent of its marine litter coming from land-based sources of solid waste.

This staggering disclosure was made by Associate Programme Management Officer at the United Nations Environment Programme’s (UNEP) Jamaica office, Sarah Wollring, during the workshop.

Some of this disturbing news has been available to policymakers since June 2019, when, in an article entitled ‘Caribbean beaches are littered with single-use plastics’, authors Donna Barne and Florina Pirlea raised concerns about the devastating threats to marine ecosystems across the world.

“Overfishing threatens fisheries,” they warned. “Coral reefs are declining and disappearing, and the number of dead zones is increasing. A dearth of waste management on land results in pollutants and debris, finding home in the ocean.”

A new World Bank report published then, ‘Marine Pollution in the Caribbean: Not a Minute to Waste’, also provided a gripping analysis of the causes, while offering solutions for ocean pollution.

Daphne Ewing-Chong, in an article published in September 2019, ‘Caribbean Islands Are The Biggest Plastic Polluters Per Capita In The World’, puts into perspective the region’s less than impressive role in global marine pollution.

Ewing-Chow pointed out that in 2016, global plastic waste amounted to some 242 million metric tons. Of this, 137 million tonnes (or more than 57 per cent) originated in East Asia, the Pacific, Europe, Central Asia, and North America, much of which made its way into the ocean.

In 2015, the Journal of Science surveyed 192 coastal countries and confirmed that Asian nations, most notably China, Indonesia, the Philippines, Thailand and Vietnam, were 13 of the 20 biggest contributors of marine plastic waste. But as is often the case, numbers alone do not tell the entire story, she pointed out.